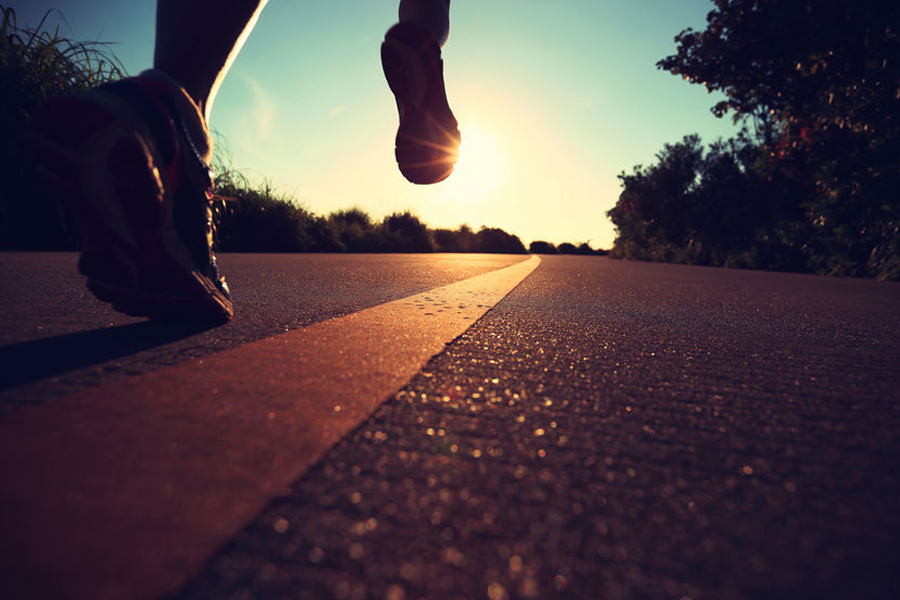 Swatches of sand, nuggets of gravel, and shreds of skin cling to my right forearm, held in place by fresh blood. This is what happens when you’re nearing the end of your run on the bike path, can barely lift your feet, and get felled by a tree root that has cracked and lifted a section of the asphalt: You wind up sprawled out on the shoulder with a not-yet-dried mixed-media collage on your arm.

A woman riding the other way on her bike slows to a stop and asks if I am okay.

“I’m alright,” I grumble as I sit up, embarrassed and in pain. “Thank you.”

When I get home, my husband asks how my run was. I respond by showing him my arm. Although he cringes in sympathy, his first and most pressing concern is “Did anyone see?”

The next time I run, a few days later, I abandon the bike path in favor of my other training ground—the high school track. There, I run into Stella, a woman whose last name I do not know but who I see walking in lane seven from time to time.

I tell her I’ve been using the bike path lately, recount my fall, and show her my wound. It’s starting to scab over now, and there’s a bruise the color of an overripe banana connecting it to the tip of my elbow.

A few days later, I tell my dad about my fall. “Are you sure you should still be running at your age?” he asks from the other end of the phone. (I am 44.)

The next time I see Stella at the track, about a week after my tumble, she reaches into her coat pocket and produces a leaf from the aloe plant in her kitchen, which she has carefully protected in plastic wrap.

“I was hoping I would see you today. This will be good for your skin,” she explains as she rubs the juice on my arm. As a 21st-century woman, I know I should be more enlightened. I know I should be cheering for the female CEOs and astronauts. But some days, I’m grateful for all the female caregivers.

About the Writer:
Erin Binney is a former business reporter, a current copyeditor, and an Olympic hopeful in home organization. She has a B.A. in English with a concentration in creative writing from James Madison University and expects to earn her MFA in creative nonfiction from Bay Path University in 2021. Her piece “Love Takes a Recess” recently won first place in its category in the International Society of Family History Writers and Editors “Excellence in Writing” Competition.