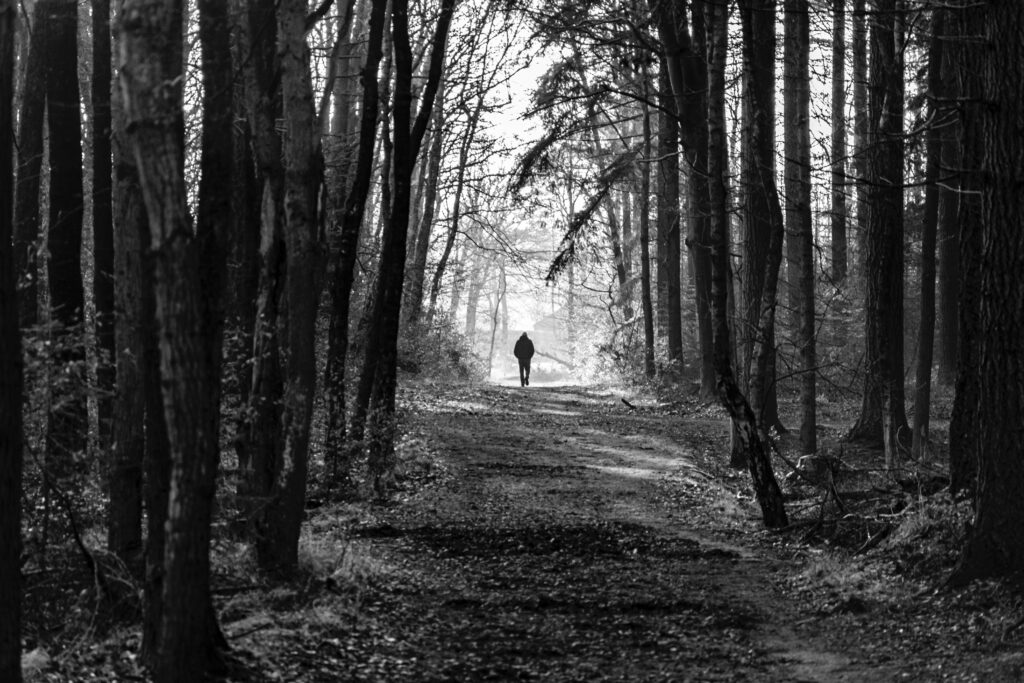 A year’s-end storm. It pelted my shingles with sleet for an hour, then slashed Hills & Dales Park like a scythe, stripping trees and brush. Nothing’s uprooted, no large limbs down, but with yesterday’s lush bright foliage like a veil removed, the world today seems bare. I carry this impression onto Deep Hollow Road, and from halfway up a slope, spot a ring uncovered down there among the roots. Limestones in old concrete. They outline a trough where a rich man used to stop, loosen the reins on Spinner, and let his favorite horse drink. Right there in the privacy of his personal property, relaxed among his sovereignty, he’d lean back in his saddle while his daughter did the same, watering her pony. Now, he is a monument, the man-on-the-horse statue atop the hill.

This time of year, shed of its outer clothing, Nature reveals things we tend to forget: remnants that suggest we lose to time much more than we can ever know. This condition is simply factual, the way it is. The park is not a cemetery. It’s a garden. What remains in it today, what its surface reveals, is the naked truth, and John Keats suggests, “Beauty is truth, truth beauty,—that is all/Ye know on earth, and all ye need to know.”

Truth is attractive, as necessary as air, earth, sun, and water. An organic sustenance for body and soul. The simple act of walking in the woods tells me that the truths I know locate and direct me like a compass. Recognizing these truths makes me feel at home here. I fit in. Truth can leap from the actual into essence, grounding me in facts connected to the universal order.

So I fancy that from the southern sky the sun’s burning eye spotlights crevices and crannies as if in praise. As if acting intentionally, calling attention to props in the drama of life, things it could not reach for months until now, until the time was right.

I also notice, down there among the roots, two old trails. They wander a short distance into shadows and disappear into the past. Their traces suggest that others were here using this place before now. Before me. Who, what, how, why? The answers are mostly gone forever.

Monuments help us remember what is chiseled in stone, usually a few dates and names. Their obvious omission of countless particulars evokes a sense of the rich mystery of existence as well.

Pictures of this land a hundred or so years ago, about when the drinking trough and the paths were put in, show most of it bulldozed and barren. Yet the land abides, and many things grow from its bed of fertility. Today, it promises that tomorrow, whether I live long enough to see it or not, among the trees and the brush, the rocks and the weeds, there will be flowers.

I too may leave traces. Someday, I believe, my spirit and all the others will produce beautiful blooms, perhaps a wild hyacinth or wood poppy, that remind a few loved ones of me.

Bill Vernon studied English literature, then taught it. Writing is his therapy, along with exercising outdoors and doing international folk dances. His fiction and nonfiction has appeared in journals and anthologies including Steel House Review, Marathon Literary Review, Parhelion Literary Magazine, and Entropy. Five Star Mysteries published his novel Old Town in 2005.