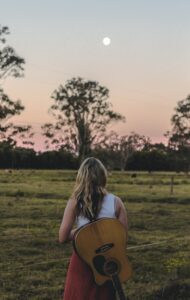 The year felt ominous long before I ended up here, in California. I read Orwell’s 1984 at least a dozen times before I finished high school, and Big Brother has been stalking my nightmares ever since. I’m in Sacramento, a city that feels like a disaster waiting to happen. My company, Greater Pacific Manufactured Housing, transferred me here from the Albany, Oregon plant in January, months after I turned 36. They told me it’s a good career move.

Albany and Sacramento couldn’t be more different. Albany is a smallish, rural community, 20 minutes away from a university town. Sacramento is the kind of city where most of the turns at traffic lights take you into shopping malls. And they must all be new because the decorative bushes surrounding them still wear plastic name tags. The one evening I brave Macy’s, the store is eerily quiet except for the pinging of clothes hangers swishing across the rods. The women swishing the hangers are vacant-eyed, like they are in a trance. Swish ping swish ping swish ping. I leave before I become one of them.

The only apartment I can find that allows dogs is in nearby Folsom, not far from the prison. Sirens wail most nights, announcing another incident. In March, the newspaper reports “only” 80 stabbings at the prison so far this year. I pass chained work crews on my way to and from work. Signs everywhere warn you not to pick up hitchhikers.

If you cross the street in front of my apartment and follow a trail around the rodeo grounds, you come to the American River. Turn left, and after a while the trail becomes asphalt and shadows the river into Sacramento. If you turn right, the trail stays dirt and after a couple of miles, dead ends at prison property. The prison itself is hidden behind acres of woods.

A tower guarding the property looms behind a chain link fence at least 20 feet high with lethal-looking barbed wire coiled on top. The guard, wearing mirrored sunglasses like an actor in the movies, stands holding what looks like a machine gun. From his vantage point in the tower he probably watches Beau Beagle and me approaching long before we ever see him. More than once he has pointed his machine gun at us and shouted over his bull horn, Halt! Do not approach! Turn back!

Guessing that the guard would shoot us only if we were actually scaling the fence, Beau and I prefer the dirt trail. Leashes make Beau depressed, and there are too many bikes and runners and walkers on the asphalt for him to meander on his own. We always have the dirt trail to ourselves.

When I first moved here, I contacted the Sacramento Rape Crisis Center to volunteer. I’m a survivor myself and had answered the hotline at the Rape Crisis Center in Oregon. I’m eager to get to know the other volunteers, but meetings are only once a month. The hotline is transferred to my home phone several nights a week, and on weekends I respond to hospital calls. Inside the emergency room, a sign lists priorities: Heart attacks and other life-threatening situations first. Then prisoners, so the guards can get them back to the prison quickly. Rape victims are third. One more reason to volunteer.

My one friend in Sacramento is Michael, a tall good-looking gay man who works at one of Greater Pacific’s factory dealerships. Friday nights we go dancing at one of the many gay bars. Condom vending machines are prominently placed along with posters about AIDS. I meet him there so that if (when) he finds someone he likes, I can get myself home.

My boss, whom I refer to in my head as Commandant Sleaze, has a breast implant on his desk that he fondles when I meet with him. I fantasize about sneaking in some night and stabbing it with my utility knife.

At least once a week I call Buck, my boss back at the Albany plant, on the company’s dime and complain about Commandant Sleaze, Sacramento, and my life in general. After he listens sympathetically for about three minutes, he tells me to suck it up. Even if I decide not to stay with Greater Pacific, he says, this experience will work to my benefit. I just need to gut it out for a year or two. Then he entertains me with all the gossip at the plant and makes me laugh.  It occurs to me that many of the people I am so homesick for are the same ones I was glad to be leaving.

After work, I go home to my tidy little apartment, put some classical guitar music on my stereo, and cry to Segovia playing “Sarabanda.” If it is still light enough, Beau and I walk down to the American River and I throw rocks while he scrounges through the brush looking for whatever it is dogs look for. After I learn that this area is crawling with rattlesnakes, I carry a knife and snakebite kit and try to make Beau stay on the trail with me. When we get home, I cry some more.

I am sick of my own company. Even Beau Beagle is tired of me. Last night he sighed heavily at my tears and left the room, grumbling at me over his shoulder. I think about Buck’s advice to “gut it out.” I’ve always wanted to learn to play the guitar; maybe this would be a good time. But not the “Hang Down Your Head Tom Dooley” guitar my friend Henry taught me when I was a kid. I want to play classical music. A music store recommends Tom, a teacher who had studied with Andrés Segovia himself. I love Segovia and have several of his albums.

On a rainy Wednesday evening, I drive to Tom’s house. Probably in his mid-50s, he is stocky, with square sturdy hands. Longish grey hair. He wears a soft blue denim work shirt with the sleeves rolled past his wrists and faded jeans; his feet are encased in thick socks and Birkenstocks. He looks more like a sculptor than a classical guitarist. He takes both my hands into his when he introduces himself. His hands are warm.

For an hour he shows me how to sit, hold the guitar, where to place my fingers on the frets. He leads me through simple exercises in a beginner’s book and smiles encouragingly each time my fingers land on the right note. He tells me to keep the guitar, that after a few lessons, he’ll help find one that’s perfect for me.

Before Tom puts my loaner guitar in its case, he says, “Allow me to play some Bach for you.”

Our knees almost touching, he curls himself around the guitar and plays Bach. His grey hair hangs over his shirt collar, his lined face. Rain pelts against the windows. I close my eyes.

I used to give my heart freely. Maybe too freely. It’s been almost six years since I left my violent husband, and still, if anyone wants my heart now, they have to pry it out of my clenched chest.

Yet listening to Bach being played on a guitar so close I can touch it, something deep inside me shifts.

When Tom finishes playing, I’m not sure who I am anymore. He studies me for a moment and then says quietly, “Why don’t we go get some apple pie.”

I follow him through the heavy rain to an all-night restaurant. We eat giant cheeseburgers that drip down our arms, French fries, and apple pie with ice cream, washing it all down with one pot of coffee after another. I tell him the long sad story of my life and he tells me his. Then, high on caffeine, we turn silly. We laugh so hard we snort, which makes us laugh harder.

It’s long after midnight when we leave. We hug, my head just above his heart, for a long while in the restaurant lobby. I can hear his heart beat, or later, will believe I had. He says he hasn’t laughed that hard in a very long time. I tell him I haven’t either. He kisses me on my forehead. Then, laughing, we run through the pouring rain to our cars.

Nobody in the history of the world has ever practiced a musical instrument as hard as I have this week. I can’t wait to master this beginner’s book so I can play Bach. When I get home from work, Beau and I race each other down to the river and back before the hotline is transferred to me. After each call, I process what the survivor has shared by playing chords.

I pray for callouses to materialize on my fingers so they won’t hurt so much when I press the strings. Maybe Tom and I will become great friends. Maybe lovers.

The day before my second lesson, a strange man calls. He says he’s Tom’s brother. He says he’s contacting Tom’s students to let them know Tom has died of a heart attack.

That’s not possible, I say. I have Tom’s guitar. It’s right there in my living room. I played it just this morning before work.

Tom’s brother meets me the next afternoon at my office. He tells me about going to Tom’s house when he didn’t answer his phone early Thursday morning and finding him in his bed. I tell him about the night before—Bach and the rain and apple pie and laughing. Both of us cry. We walk out to his car together and embrace in the parking lot.

When I get home, Beau Beagle and I walk to the river. I throw some rocks. Watch the current rush by.

After Tom and I hugged in the restaurant lobby and ran laughing through the rain to our cars, he drove home. Before he went to bed, maybe he splashed some water on his face, brushed his teeth. Maybe he was wearing pajama bottoms, his chest, covered with soft grey hair, bare. Maybe he was still smiling when the heart I listened to stopped.

I try pinning Tom’s death on Sacramento—one more crap thing to hate this crap city for. But I can’t make it stick.

Something extraordinary has been given to me. I shared the last night of Tom’s life. A gift far too precious to squander on my petty grievances.

I stare at the river. Wipe my nose across my sleeve. Toss some more rocks. Beau sits in the middle of the trail waiting for me.

We walk towards the prison. As we approach the fence, I see the guard in the tower watching us through his mirrored sunglasses. He has his machine gun. I stop and look up at him. Beau stands next to me. On a sudden impulse, I hold up my right hand, palm out, fingers spread open. The guard stares down at me. His sunglasses flash. Then, shifting his machine gun, he raises his right hand, palm out, fingers spread open. We stand there like that in the deepening dusk.

Mary Zelinka lives in Albany, Oregon, and has worked at the Center Against Rape and Domestic Violence for more than 30 years. Her writing has appeared in The Sun, Brevity, Eclectica, and Memoir Magazine.