The taxi to the airport, a mud-covered jeep threading narrow streets. Burning garbage and car exhaust giving each intersection the faded atmosphere of a film set. (Cut! Back to one, people! We’re going again!) Poverty peels the paint from the crumbling colonial buildings with their tall doors in what was once the Paris of the West Indies. The end of yet another week far from home. Yet another country with a questionable airline schedule. I am a stranger by profession, but this place, this place I will refuse to forget.

People swarm the street calling to each other, explaining, arguing, comparing, contrasting, who knows; hauling wood and water and mattresses on their heads. Commerce and conflict and a motorcycle carrying four men plus a goat, somehow making a dignified life possible in this impossible place. The Haitians seem at once pushy and reserved. Line-standing is not observed well here. No one expects it to be. I am the only white person I’ve seen outside the UN-sponsored conference at the hotel, and even there I was one of three in a hundred. Or maybe half of one of three, really. By birth I am Latina and Filipina, as well as white, but my adoptive parents were white, so white I became. The thing is, outsiders—white or otherwise—are neither curiosity nor threat here. The oppressors have been internal for 200 years. More recently, waves of foreign aid workers have come and gone and come and gone, unable to make a dent in the corruption atomized by the fall of the dictatorship, keeping Haitians the most poorly resourced people in the hemisphere. People look through me. Past me. My invisibility is so quietly shocking that I wince with recognition at the implicit expectations that I apparently pack in my carry-on. 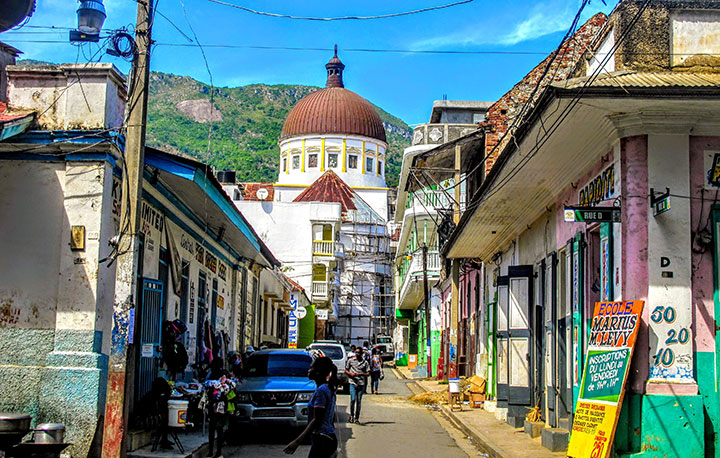 Traffic stops my taxi in front of a school. The very old man sits in a plastic lawn chair in the gutter outside a gate (many people here sit in plastic chairs on the curb as if it’s their living room). But this man is at work, I think—guarding the schoolyard where barefoot but spotlessly uniformed kids crowd in both directions. He too wears (what may have once been) a uniform. His face a theatrical mask: Not lines, but deep, deep folds. Rodin’s Burghers of Calais. All the cares of generations in them. The whites of his eyes and the red streaking through them stand out against his skin, darker than charcoal but reflecting light rather than absorbing it. Obsidian maybe. Shining like that.

He and I are face to face, eye to eye, my seat in the cab two feet from his on the street. He is scowling his weary scowl into the street in general, and if I have blocked the direct trajectory of his thousand-mile stare, he gives no reaction. My eye contact feels like an intrusion. To him, I must be just another etranjè. But at this late point it would feel rude to look away.

And when I do, when I do his entire face breaks open in a brilliant flash, a grin so broad, so gracious it engulfs me, a shared embrace so kitchen-table it pauses the earth on its precarious axis. Pooled eyes flecking shores receding, advancing. A screen door ajar. A tiny wooden puzzle. Boat-shaped. Hand-carved of feeling. Sun through the east-facing window before Magellan and this morning.

Then time restarts itself. The taxi lurches away down a road that has no lanes nor even a right or left drive-side and we part with a nod. As if old friends. Under everything—under anything—the same heart beats.

Kate Gonzalez Long is an elderly abolitionist feminist living and writing in Los Angeles. She has spent two decades in emergency management, and is recognized nationally for her leadership in seismic and disaster hazard and communication. She started her career as a film producer in Hollywood, following a number of years as a political performance artist and actor.