The wet-dry vac, my boss Chuck told me, was where it always was—underneath Jacob’s Ladder. “Give it a good rinsing, inside and out,” he said, “and then you can go home.”

It was late August, 2003, my last day at a summer job before I headed back to college. And even after two summers scooping ice cream for a fountain luncheonette in its second century of operation on the coast of southern Maine, I did not know what or where Jacob’s Ladder was.

I wandered around the tight, whitewashed hallways, almost ducking beneath the low, bowed ceilings in back of the restaurant until I saw a staircase that looked biblically old. Or, at least, old enough to be venerated biblically. Beneath the stairs (decidedly not a ladder), there was a vacuum cleaner (a vac). Industrial-sized and industrially stocky, it sat there in darkness hibernating like a sturdy, unbreakable droid.

I wheeled it down the hallway past the ice cream freezer and between the unused laundry machines, careful not to tug on its hose. I bumped its great belly into the spring-loaded screen door, heard the thin green wood smack like skin as it closed behind me, and wrestled the vac over the concrete patio to an outside floor drain, where the mouth of a garden hose pointed like a directional arrow. The smell of salt water spray and sunbaked garbage mingled in the air.

The vacuum came apart fairly easily. Shed its shell, I mean. It revealed what lay beneath without much complaint. I didn’t unscrew any screws before I saw into the core of the thing. Thin metal ribs lined beige fabric tubes. The tubes were covered in dust, and coiled upon each other like dry intestines.

Yes, I know—and knew even then—that the insides of a wet vac should be hard and plastic (for the wet), and yes, when I saw the fabric of the inner tubes (and the dust) I paused and held the running hose in my hand for a beat.

But what can I say except that I hosed the thing down?

What can I say except that if this were not the wet vac whose guts I was supposed to be rinsing, then what was it doing under a staircase? Or why would Chuck not have said, no, not that regular old dry vac under that other old staircase that we maybe don’t even have a name for. . . make sure you get the vac I’m talking about, from under that other staircase—you know, that Jacoby-looking set of wooden steps. The ones you climb to heaven?

What can I say except that once this ancient robot had been de-shelled, it looked like it could use a rinse?

What can I say except the water flowed out the hose when I cranked the faucet handle to the left?

That the pressure of the water grew with my thumb pressed over the open mouth of the hose?

That it blasted the dust away? That I paused again?

That the runoff found its way to the outside drain, nestled in the center of the pitched concrete and hit the turn in the underground pipe with a sound like the plunk plunk plunk of my slowly thinking brain?

Thinking, too slowly, this cannot be right. Why would a wet-vac be so dusty? Why the wires? I am almost sure that I should not wet wires.

What can I say except that I thought about it and doubted myself, and convinced myself, knowing that the tourist trap of the luncheonette was, at all times, too busy to ask anyone a question a second time? What can I say except that I was on my own, generous enough in my creative thinking to suppose that industrial-sized wet vacs may look different on the inside, that the tube fabric might be deceptively slick and waterproof?

What can I say except that I kept going? That I tried to operate the pressurized stream like a scalpel to cut in between the soft parts of the vac’s insides and slice away dirt by the molecule?

What can I say except I thought I had it right?

The surgical precision with which I operated took time, and at the institution of the Goldenrod, one was never alone for very long. Carrying a bag of trash to the dumpster beside me, my other boss Dave was the one who found me trying to clean the company vacuum, or sabotage it, depending on your perspective. 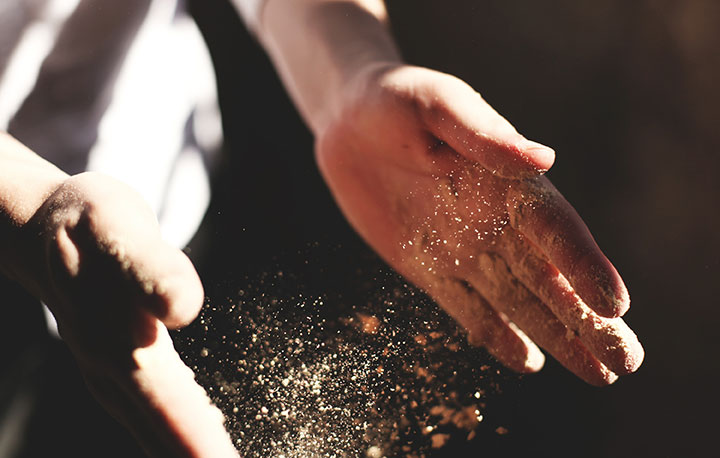 He shook his head with the practiced rhythm of someone who had long ago become resigned to the kind of mishaps that result from hiring teenaged idiots.

With his eyes fixed on the disassembled regular old dry vac dinosaur—lungs and bones exposed and dripping—he reached out his hand for me to give him the hose and told me I could go home. He’d clock me out.

Not a great way to leave a job, but one of my most memorable moments there. But it makes me ask, why this memory? Why does it pop up now, on this August day in 2020, the first day of the sixth month of this different living? This quarantine, this shelter-in-place, this stay-at-home order, this phase three back to phase two, back-to-phase-one-hit-the-reset-button and try again? Why is this piece of remembered string the first thing I’ve managed to pull from my head to the page in four months?

It’d be nice to make it clean. It’d be nice to say the garden hose means this, the vac means that, and here’s what I’ve learned. Read it like a dream. But it’s hard to say what’s happening in my brain these days. Hard to tell whether something is an escape or whether it’s a search for a new angle, some way of seeing that doesn’t feel so used up.

Hard to say if what I miss is a simpler summer (for me), a simpler task (for me), the kind of privilege of (my white) youth and (my) yesteryear when I was let loose to break things in the process of figuring them out. Or if what I miss is a problem as physical as a dirty vacuum cleaner. Something I could get my hands around, even if not my head.

It occurs to me that these days we’re all looking for answers. The comfort of knowing what is right, or safe, the satisfaction that we are working toward what is just. And I feel, these days, like certain portions of my day are spent with my head in the sand, escaping into the melodramatic arcs of long Netflix television series, flipping on a comedy and shutting down everything but my ears and the laugh track that barks out of my throat.

Maybe the comfort of an answer is, right now, as escapist as the kind of show that runs into the next episode quicker than I can find the remote control. Maybe what I miss, what I need, is the time to pause and really feel the weight of uncertainty, to look at the dust on the old tubes and wires, to hold the streaming hose and wait—and listen to the waiting. To listen to the sound of the water splashing on the hot concrete by my feet, the stream running into the drain—plunk plunk plunk­—to listen to the sound of the dust that covers the fabric, see which molecules are settled and which float, impossibly, in the new air.

Devin Donovan lives in Charlottesville, Virginia, where he teaches in the Writing & Rhetoric Program at the University of Virginia. His work has appeared in the Stonecoast Review, The Real Story, Mantis, The Windsor Review, and elsewhere.