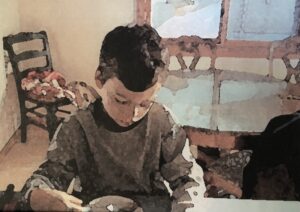 Tell me it’s going to be okay, I want to say.

My husband and I are standing on the other side of the counter, dressed for work (it’s the summer of 2001, so he’s still wearing ties and I’m probably wearing a rayon wrap-around skirt). We are waiting for our slow eater, the one who is slow to rise each morning, slow to ferry his backpack out to the car. Hurry, hurry, we are always urging him on. But not this morning; on this morning, we let him set the pace.

I am leaning against the kitchen sink now, listening to our son chew and swallow, chew and swallow. I am marking this moment, days before our house passes on to new owners, a couple with two children like us—but who aren’t divorcing.

My breath catches when my husband leans in toward me to speak.

Softly (very softly) he says, “Listening to him swallow … it makes me want to cry.”

In the months after we moved to separate townhomes, I spent many nights working on the last division of our marital property. Sitting cross-legged on the tired teal carpet blanketing my new living room, I painstakingly sorted through 22 photo albums from my decade-long marriage. First, I would remove all the photos in an album from their plastic sleeves. Then, I would divide these into two piles (his and mine), making sure we each received a fair share of photos representative of our life together. I’d do the same with another album, then I’d add his photos to the empty sleeves in one of the albums, mine to the other.

The day before we moved to separate homes, my husband emailed me at work.

“I thought you might want this,” he wrote, and attached a digital photo of our son dawdling over his Scooby-Doo bowl at the blue counter. I loved the photo, even if no six-year-old should ever look that sad, even if the photo seemed to be asking, how can we do this to our kids?

I had an answer. Years of therapy had failed, and our house was sold. The momentum of loss was now at the helm.

That summer, my cubicle was located next to our company’s webmaster. He showed me how to transform the sad photo of my son into what looked like a watercolor painting. The result was hauntingly beautiful. I printed it on a color printer and hung it on my gray fabric wall.

One day in late October, I proudly presented my not-yet-ex with 11 photo albums. By then, I was dating someone. By then, the father of my children would no longer look me in the eye. He silently accepted the albums when I ran them out to him after he’d dropped off the kids. I wanted him to reverently place the albums on the front passenger’s seat. I didn’t want him to carelessly toss the canvas bag over his shoulder and into the backseat.

That unhurried summer morning in the blue kitchen, standing in front of our son, I’d looked away when my husband spoke into my ear. I didn’t let him see my tears.

A few nights after I’d moved into my townhome, one of the kids clogged the toilet. I discovered I no longer owned a plunger. One doesn’t always know what’s missing until it’s gone. My only saving grace: I’d once learned how to turn off the valve at the back of the toilet to prevent backed-up water from flowing over the rim. I did this, just in time.

Almost 20 years after my ex-husband and I divorced, I stand in his kitchen two days after his unexpected death. Two weeks earlier, he’d stood in my kitchen on the night he and his wife joined my second husband and me for Christmas dinner with our grown children.

Now, the kids and I watch as his widow pulls items down from an upper cupboard. My breath catches when she wraps her hands reverently around a bowl with a purple rim and a picture of Scooby-Doo at the bottom, offering it to her 24-year-old stepson.

“He always ate cereal from this bowl,” she tells us. “Even that last morning.”

My son leans over the kitchen island, receiving the bowl from his stepmother. The bowl looks small in his large hands. Head bowed, curls trimmed short, I see the outline of his father. I don’t look away. I allow the sorrow. I allow my once husband back onto the map of my heart.

Heidi Fettig Parton received an MFA in creative nonfiction from Bay Path University in 2017. Her writing can be found in many publications, including Assay Journal, Brevity’s Nonfiction Blog, Angels Flight, literary west (AFLW), Entropy, The Manifest-Station, and The Rumpus. Find her on Instagram @heidifettigparton or at www.heidifettigparton.com.