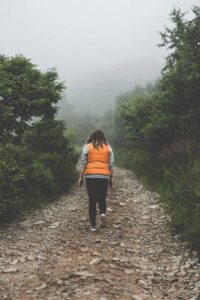 I was eleven, a babysitter. I made breakfasts, lunches, snacks, and rules. I stayed up past my bedtime in houses that made noises different from my own. I sat alone on couches after I put the kids to bed, televisions muted, and listened for bad guys creeping in the haunted dark outside.

I was twelve, an office helper. I spent entire Saturdays dusting and vacuuming and filing and organizing. My age and my paycheck were the same.

I was sixteen, a hostess. I set the table in the McDonald’s Play Place. I took the orders, brought out hamburgers, cheeseburgers, chicken nuggets, and fries. I cleaned the lobby, the women’s room, the men’s room. I sang “Happy Birthday” as I set down the cake. I cleaned it up and did it again every two hours.

I was seventeen, a hostess again. I worked extra shifts to pay for my books. I took reservations, seated patrons, kept the salad bar clean and full. I slapped the hands of the kitchen crew, the face of that one waiter who always seemed to work my shifts, to be everywhere that I was. I stood at the back of the walk-in freezer hoping he wouldn’t come any closer. I quit.

I was twenty, a flagger. Orange vest, orange helmet, shorts and sneakers on hot tar. I stopped the cars, waved them on, drank in the sun and fresh air. I ignored the whistles and comments about my body, the notes thrown from car windows.

I was twenty-one, a babysitter again. I left my dorm every Wednesday, drove thirty-five minutes for eight dollars an hour to watch a one-year old. His father had hired me. On the fourth Wednesday, he stopped leaving for work. He asked me to stay anyway. I quit.

I was twenty-four, a live-in nanny. One newborn, one little girl, one stay-at-home mom. I cooked, did laundry, gave night feedings and baths. I changed diapers, stayed in the guest room, lost a sock. I found my sock and the Barely Legal magazine under my bed. I threw the sock away, tucked the magazine in with his pile of clean clothes I had just folded.

I was thirty, an executive. I wore suits and heels and ran meetings. I worked on my drive in and on my drive home, after dinner and on weekends. I had a company computer, a company phone, and a company smile. I had money in my account. He was a manager with an identical paycheck to mine; I had more responsibility and worked more hours than he did. I proved myself. I disapproved of myself. I resigned.

I was thirty-seven, a landlord. I changed light bulbs, fixed toilets, changed locks, and made keys. I called about rent, made visits, called the lawyer, and evicted. I sold one property, then another. There is one property left to sell.

I am forty-one, a wife, a momma. I make meals, make faces, make up songs, and make pretend. I have less money in my account and a real smile on my face. I’m exhausted, un-showered, hungry and happy. The laundry and love pile up.

Rhianna Webb lives with her baby girl, Jax; a tiny dog, Ditto; and husband Patrick, whom she met on an island beach. She can often be found daydreaming of writing while doing mindless tasks, and writing when she should be sleeping. When those around her continually repeated, “You need to write your story,” she heard, “You need to tell the story. The one that, at times, feels vaguely familiar.” She earned her MFA in Creative Nonfiction from Bay Path University in 2020.