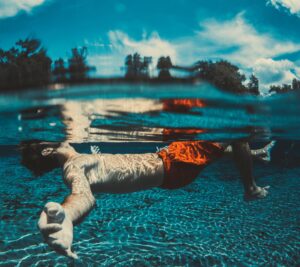 I am 44-year-old gay man who has had recurring nightmares about “shirts and skins” for decades. The dreams take me back to my Long Island childhood in the 1980s when camp counselors divided boys into teams for basketball. Though I was one of the skinny kids, I was in alliance with the fat kids who found the prospect of taking off our shirts terrifying. For me, it was my miniscule nipples that had me desperately hoping to land with shirts.

My father was among the first to make me painfully self-conscious. The day at a pool party, when, out of nowhere, he moved a towel that I had strategically draped around my neck, looked at my nipples, and said hmmm. There was the camp counselor who asked, in earnest, whether I realized how small my nipples were. And the girl at camp (what is it about camp?), no more than 10 years old, who told me that “real men have bigger nipples.”

I developed a variety of advanced coping strategies. The first was to pray. I prayed for rain. I prayed for a non-life-threatening illness that would justify my needing to wear a shirt at all times. I prayed for my nipples to grow bigger overnight.

When that didn’t work, and I wound up shirtless, I tried to conceal the source of my shame. As I ran up and down the basketball court, I bent my arms, tucked my elbows close to my side, and raised my fists and thumbs to block an easy view of my nipples. In the pool, I treaded water, even in the shallow end. I never learned how to dive—standing with my arms raised to the sky would have been an advertisement for the world’s smallest nipples. I was always the first kid to be “too cold” to continue swimming, preferring instead to be sitting with a towel (which worked well enough, except for that time with my dad).

The shame stayed with me as I grew older. In the high school locker room, I changed clothes quickly with my back turned to others. At college, when walking from the shower to my dorm room, I wore a t-shirt above my towel.

Being gay didn’t make things any easier. At nightclubs, I’d be among the last to remove my shirt, usually at the insistence of a friend or a potential hook-up. The dimmed lights and collective drunkenness were my salvation. During summer days at the beach, I used my pale complexion as an excuse (skin cancer, people).

In the early aughts, I was moved to tears by the Dove beauty ads celebrating women of all sizes. I wished in vain for Old Spice or Gillette to launch a similar campaign featuring men with different-sized nipples.

In addition to having nightmares, I’ve found myself Googling “male nipple enlargement surgery”—to my surprise, this mostly produces information for men who would like to reduce their nipple size.

About a year ago, I learned that I was positive for the BRCA1 gene mutation. According to cancer.gov, it means I have a mutation on chromosome 17 that normally helps to suppress cell growth and certain types of cancer. My mother, a breast cancer survivor, passed the gene along to me. The odds of my developing male breast cancer, though still small overall, are significantly higher than the lifetime risk in the general population. The treatment for male breast cancer is similar to the treatment for women—a possible mastectomy, radiation, and chemotherapy.

I consulted with an oncologist who performed my first breast exam. I lay down on the examination table, my heart thumping with anxiety, as he moved his hands in a circular motion on my chest, underneath my armpits, and along my sides. To my relief, he didn’t find any lumps. He showed me how to perform a self-exam, ideally on a monthly basis, and scheduled me for a return visit in a year.

But in the fall my left nipple started to feel different. It was hard, irritated, and visibly different in shape and color than my right nipple. New Google search results suggested something as benign as “runner’s nipple” or as dreaded as breast cancer. I frantically performed the self-exam the way the doctor showed me. I found nothing but remained petrified.

I had a mammogram and an ultrasound to rule out the worst. As I waited for the radiologist to deliver the results, I thought about my breasts and my nipples. About how much of my life has been spent focused on this region of my body. About the embarrassment, the constant wish to alter my chest’s appearance, and the effort I’ve expended trying to hide my nipples.

The radiologist entered the room with good news: the scans were clear of tumors. Some benign nodules could explain the discomfort. She recommended a follow-up consultation with a breast surgeon as a precaution.

Now, the snow of a long Northeastern winter has finally begun to melt. Spring has always been my favorite season for its promise of baseball and the many days in which either short or long sleeves will do. In May, my husband and I will celebrate our daughter’s ninth birthday. But where others are in a rush to get to summer—to its beaches and suntanning on rooftops or poolside—that countdown has always filled me with dread.

This morning after my shower a strange thing happened. I looked at my chest in the mirror and thought, I so want to keep my nipples. And with the thought came memories never fully encountered before. The Florida vacation in my mid-twenties when somehow I managed to walk on the beach with, if not confidence, at least the conviction that if folks were looking at me it might be for other reasons. The few times when in the darkness and in the passion of a moment I could let go of all this and enjoy a guy treating my chest as an object not of derision, but of desire. What would it be like to live that kind of season? The question prompts within me the thrill of possibility.

I want to take off my shirt and stand in the warmth of a summer sun. I want to swim in the ocean and feel the water rush across my bare torso. I want to embrace a freedom I’ve never known.

I want to choose skins.

Brad Snyder is an essayist and humor writer whose recent nonfiction work has appeared or is forthcoming in the Gay & Lesbian Review and The Dillydoun Review. Brad is currently pursuing an MFA in creative nonfiction. For more of his work, visit bradmsnyder.com or find him on Instagram @bradmsnyderwriting and Medium @bradmsnyder.