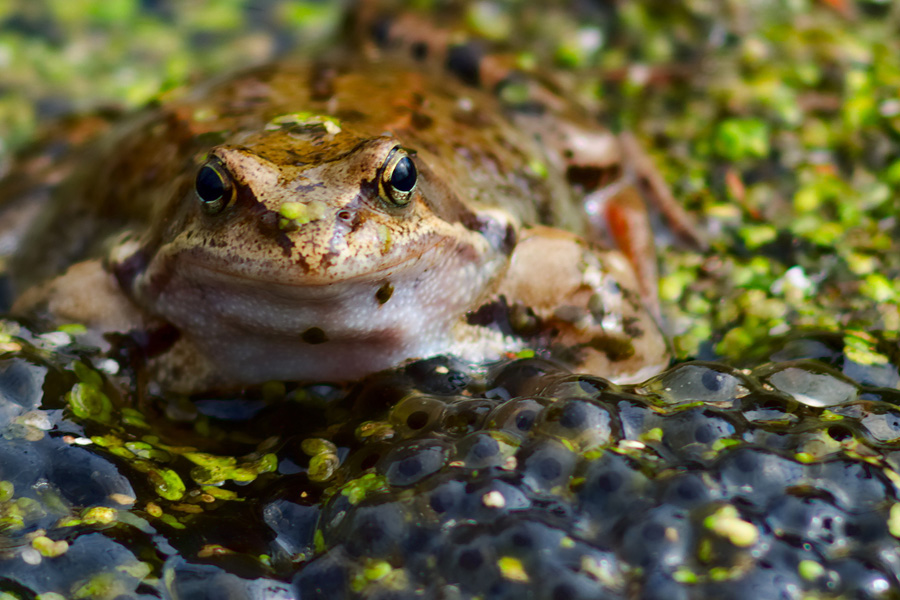 Leaning in over the swamp’s edge
I’m drawn to an anomaly—
intensely dark pulsing water,
like an oil spill in the shape of an archipelago;
Long Island viewed from 10,000 feet,
early morning commuters beginning to stir.

A mass of frog embryos,
having just crossed over into life,
embrace each other in an inky mass,
then break out blindly like bumper cars
rhythmically waving spermy tails.

Nearby, rafts of eggs float looking up
with dazed black-yoked eyes
cast blindly to the heavens.

The mother to this life spill
sits by my feet,
a Buddha frog
in contemplation of her creation,
witness to galactic birth.

I’ve been looking down a lot, at
floating islands of pale blue flowers,
stone snapshots of river flow—
I’m starting to see down and up
as different versions of themselves. . .
but who is watching me?
Certainly not the frogs.
Birds show little interest,
practicing avoidance with both eyes.
They think that I can’t fly

After a rain
the world stands in place,
sedated by its presence—
it’s holy water
that falls upon us.
There is no other kind.

To a fallen tree

What do you miss most about standing tall?

The shape of limbs I sense but cannot see

My leaves giving sound to the wind

Taking a long slow drink after a summer rain

Is there anything good about lying on the earth?

Yes, returning to my roots

About the Writer:
Austin Metze is a poet, essayist, painter, and book designer. His work has been published in Weeklings Literary Journal and Tiny Seed Literary Journal. He has self-published three chapbooks: Crow’s Blood, Hudson Street, and I Tried To Show My Dog The Stars, as well as a book of essays, When Life Calls You Out, It’s Usually Onto A Highway.