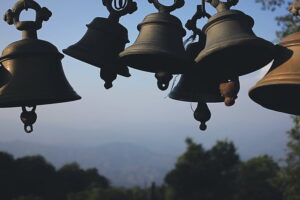 The 600-mile trip from New Jersey to Maine seemed endless this time, most likely because we were not on vacation. My granddaughter and I were tired when we finally pulled into the driveway of the house in Halls Mills. Michaela was not speaking to me. When she last spoke a hundred miles or so ago, she used her teenager voice. I knew there was an accompanying eye roll even though I was driving and she was sprawled across the back seat.

The moment I turned the engine off, Michaela leaped out and slammed the car door. I was unable to move. “What have I done?” I mumbled under my breath.

No time for doubts about our decision or fears for our future. Michaela had to pee.

“Hurry up, Nammy, unless you want me to use the backyard.”

I dragged myself out of the car, fumbling for the house key. I found the key, unlocked the door, and Michaela rushed into the house.

I stood alone on the porch remembering the day 40 years earlier when I first saw this house. Bronze bells, hanging from a large pine tree, softly chimed in the gentle breeze. We paused for a moment to listen to the bells. The realtor told us that the owner and his partner were both artists, the owner a painter, his partner a metal sculptor. She added that they were the first people from outside the Hall family to live in the house, the first people from away, the first artists in this tiny old mill town. They hadn’t lived here long.

We had entered the house through the side door and passed through the hallway into the kitchen. The kitchen seemed enormous, its high ceiling still covered with the original tin, painted white. The wainscoting encircling the room, once white too, was smudged here and there with hints of real life going on in this kitchen.

It was mid-October, but the fire blazing in the old wood stove made the room almost steamy. A rocking chair faced the stove but the owner of the house sat instead at the round oak table near the middle of the room. Three wooden chairs and a blue milking stool were arranged around the table.

The man looked up at us and then down toward his lap. He cradled a small dog in his arms.

“My dog is dying,” he murmured. Nothing more.

I felt a twinge of sadness but did not know how to respond. My eyes quickly moved to the large black farm sink, set in a hand-crafted cabinet. At that moment, the sun beaming through the window would have illuminated the work of washing breakfast dishes, if the owner were inclined to wash the few dishes sitting in the sink.

There was no other furniture in the kitchen. The cupboards, gas stove, and refrigerator were in a separate pantry, located off the kitchen. The pantry also held an intriguing sliding wooden window built into the back wall, allowing you to peek into what was once the milk room.

Until I stepped into that kitchen, the day was a lark. An engaging but shrewd realtor lured us there, knowing we were only interested in buying a small piece of land on which to build a cabin for our summer trips to Maine. She took us to see this house “just for fun.”

Now the morning lark was something else. I am tempted to say that the kitchen called out my name.

The owner did not speak.

Later, Fred told me that he wanted the house the moment he heard the bells ringing in the trees. It didn’t matter that we saw only one room of a 10-room house, that it was 600 miles from where we lived, or that we had no clue of what maintaining an old farmhouse in Downeast Maine required. Neither did it matter that we had no money and no children yet to use those 10 rooms. Or that Fred was in graduate school and we lived in a plain four-room rented house.

We wanted that kitchen and those bells. Our thinking went something like this—we might be able to buy a small piece of land but we couldn’t actually afford to build a cabin on it. So why not buy an existing house that we couldn’t afford either? It made sense to us.

We didn’t know then that the wooden table would later hold a plastic bathtub where we bathed our babies. We didn’t know that we would have our “annual bat fight,” as we called it, over the inevitable bat or two flying overhead in the kitchen or the upstairs bedrooms—Fred  wanting to catch and release, me wanting all bats gone, dead or alive. We didn’t know that our children would play over and over again with the sliding window in the pantry and find countless hiding places in this huge house. We didn’t know that we would host scores of dinners in that kitchen for our new Maine and old New Jersey friends. Nor did we know how many stories would be told or how many bottles of beer and wine would be consumed around that table over the years.

I shook my head as if to erase those old memories. Then I called to Michaela, “Let’s unpack.”

Jacqueline Lowe is a retired social worker who began writing after she moved to Maine. She has participated in numerous writing workshops sponsored by the Maine Writers and Publishers Alliance and the Maine Senior College Network. “Making it Home” is her first published piece.