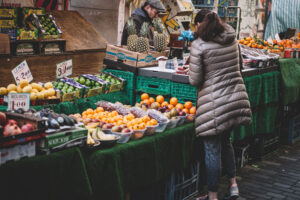 Mami told me stories about her long walks to and from school in Jayuya, Puerto Rico, while she’d cut open a toronja and add salt. I’d find a place to sit at our kitchen table, pushing aside old appliances, cords, bills, and a plethora of items that had no place in the house and were never used. Mouth full of grapefruit, Mami would tell me how she used to get free fruit walking to school.

“Why’d you add salt to the bitter grapefruit?” I didn’t have that same craving.

She’d raise both her eyebrows, moving them up and down and smacking her lips. “Esta riquisimo.”

Here, Mami didn’t get free food. I mean she did. She bought her food with food stamps. Free is open to interpretation. Mami knew what spaces to enter to use them. Spaces where she wouldn’t be gawked at, rushed, or ridiculed. For the most part, spaces where I didn’t have to speak English for her to feel comfortable. Never mind that getting recertified for food stamps meant hours of waiting in line for paperwork, the agency losing copies of the only copy she had of something, or the revolving door of caseworkers she was stuck with.

She didn’t get to pick toronjas from the road anymore, but she’d go to the store with her plastic blue card, the one with her photo on the bottom right corner that looked like a mugshot. She’d swipe and use the magic four-digit passcode and we’d walk out the store with bags full of grapefruit among the other groceries. So different from the free fields of green, yellow, and pink that grew wildly in her birthplace. I imagined her dancing in fields with free hair and free fruit.

Mami grew up in the campo of Jayuya, or “la Capital Indigena,” a nickname for its location on indigenous Taino Indian sites. “Jayuga” was the name of a local Taino Indian chief. She was raised on a mountainside full of swift rivers and ample vegetation that flourished in the wilderness. Giving back to all its people.

Mami moved to Connecticut in May of 1988, pregnant with me. She left a jungle for a jungle, a strange, cold jungle that did not give back to its people. In the new country she was met with cycles of abuse, people that gave her bare minimums as promises of stability. She was swept away to new families in new cities. The social ecosystem she was used to was not valid here. It was a shock to her system, and it made her quiet and complacent for years, hard to reach.  Mami and I were never as close as she was to my sister. Steps from me at the kitchen table, she was still a world apart. I was her oldest, her pride and joy, her translator; she didn’t have to worry about me. My sister was furrowed under her breast while the grapefruit juice dripped down Mami’s shirt. I was always at the kitchen table, pushing old radios out of the way to make myself a space to eat. Watching Mami, trying to understand.

Mami was a creator of things. She created a life with a man for over 20 years. She worked over the table while he worked under it and eventually the table broke both their backs, leaving us table-less.

Mami was a resister. She resisted leaving a cheating man by going to bed early every night. She resisted parenting us by pretending she couldn’t hear our bitter cries as we watched her float around the house.

Mami loved toronjas. Toronjas and stories made our many homes, homes. The only kind of home we knew. A home where Mami once shattered the double-sided mirror and stared out as if she was on top of a childhood mountain. “Vete pal carajo,” she said in a bass voice to the cheating man. He ran out and ran back, banging on doors and windows, trying to be let in. She summoned her children, now adults, and cried and asked for our forgiveness for every time she turned away from motherhood and personhood. Every time she tried to fit molds of otherhood in this new land and with small-hearted men and small grapefruits.

She can still find grapefruits here, but they don’t look and taste the same as the toronjas from her childhood. They are not found in the depths green. They can’t be picked off the side of a narrow road on the way to school. They are arranged in rows of ten next to the oranges and lemons. They are contained in a foreign space unable to grow anymore.

Mami used to say she added salt to add flavor. From afar, at the table full of stuff, I thought she added salt to reminisce about her other life—the one that was on a hillside bursting with bitterness she craved and a sunrise she looked forward to greeting.

Mydalis Vera is a writer and graduate student, studying for an MFA in creative nonfiction. Her work has been featured in Pulp City magazine and on the Multiplicity Blog, and her book, Warrior, Guerrera: Sayings and Affirmations/Para Las Guerreras, was published in April, 2021. She lives in Springfield, Mass., with her fiancée, Kenny, and their two children. Read more about Mydalis on her website, or follow her on Twitter @Daliwlf/ or on Instagram @dali.wlf.