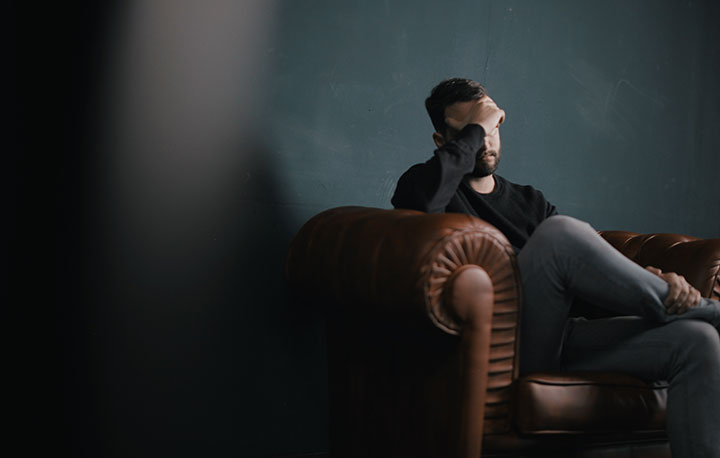 “Twice, maybe… Yes, twice I would say. Yes.” He repeats this second yes more decisively, with firm downward inflection, as if to settle the matter and regain control of this situation.

“And any problems with ejaculation during masturbation?” I continue. This sets him off again; patting his blazer pockets, he searches for something, any diversion being preferable to this line of inquiry. Finding an old-fashioned handkerchief, he slowly cleans his glasses. The harsh fluorescent lighting of the clinic is merciless, and I notice a patch of shaving rash creeping up over his white shirt collar, his discomfort only increasing the redness. At this moment, the scrubbed face of Sister Francis springs to mind, and I’m back in her classroom again, my dog-eared copy of Macbeth open on the desk in front of me.

Sister Francis gripped the wooden handle of the blackboard duster tightly in one hand; she rapped sharply on the desk to indicate that the next girl take over reading aloud. Rap-rap-read, rap-rap-read and down the row we went, a chain of listless voices. The radiators hissed softly in the background, filling the air with the distinctive wet-dog smell of sodden wool drying. The offending items, a handful of green jumpers, were slung on the radiators to dry after a damp Dublin morning. Or, more correctly, petrol blue jumpers (it was frowned upon to say green—too common—no, no, petrol blue was much more fitting for Mount Rockville Secondary School  girls).

The slow stupor of the long afternoon threatened to drown us until, abruptly, instead of the anticipated rap-rap, came, “Read on in silence to the end of the page, girls.” There was a slight stir; this was most unusual. Roused out of boredom, we hurried over Shakespeare’s lines. Slowly, stifled giggles rippled around the classroom, accompanied by nudges and whispers. Unsex me here; there it was, the offending line uttered by Lady Macbeth. Sister Francis clasped her arms together under her bosom as if bolstering her courage, her rosy cheeks becoming more and more like red apples. “In silence, girls,” she emphasized, with two more insistent raps of her duster. Sex, even the word sex, even the word sex written by Shakespeare himself would not be permitted into her classroom.

I can’t think what Sister Francis would make of my current career choice—it definitely wasn’t covered in career guidance. As a clinical psychologist specializing in the area of sexual health, I talk about sex for a living, specifically the endlessly fascinating link between the body and the mind in relation to sexual problems.

“Any medical conditions or complaints?” I ask my patient. “Recent injuries or surgeries?”

“No, fighting fit. Well, maybe a little over fighting weight now,” he laughs, patting his amply padded belly, relieved to be on safer ground. “It’s been a while since I’ve been on the squash court, let’s say. Though I do play a spot of cricket in the summer, a local club sort of thing. I was quite the batsman in my day actually…on the Blues, you know, the first team at Oxford….”

My patient settles in for the diversionary tactic of further sport talk, so I gently guide him back. “And is your partner concerned about the problem?”

“Well, there’s been a–ah–a bit of strain at home. She made me come here today, wanted me to get it checked out.” He pauses, hesitant. I nod encouragingly. “She thinks it’s about her, you know, that I’m not attracted to her anymore. Silly really…” he trails off, running out of steam.

What has changed in the last 18 months that he can suddenly no longer ejaculate with his wife, but has no problems by himself? “Absolutely nothing,” he tells me, arms crossed like armour. I wait, confident there is something beneath the nothing.

We are poor historians in our own lives at the best of times. When it comes to sexual histories, the truth is often an unhappy bedfellow with shame, guilt, and the strictures of masculinity. Like a psychological Sherlock Holmes mystery, sexual problems are puzzles to be solved with the clues sometimes readily offered, sometimes fiercely guarded, sometimes unknown even to the patient themselves. It’s difficult to talk about sex, even to utter the word aloud is embarrassing; Sister Francis taught me that. There’s a bit of Sister Francis in all of us, perhaps.

Allowing the silence to settle, I flip back through my patient’s file and scan his clinic notes; he came in for a full sexual health screen two years ago. Urine sample for chlamydia and gonorrhea: negative; blood sample for hepatitis, HIV and syphilis: also negative. The mystery deepens, until, a little further down the page, three letters catch my eye: ‘CMP’ noted by the nurse on the form, clinic shorthand for Casual Male Partner.

My eyes flick up at the clock. This assessment is going to take some time.

Sue Hann is a London Writers Awards recipient 2019-20. She won the Diana Woods Memorial Award in 2020. Her work has been published in journals including Popshot Quarterly, Longleaf Review and Litro, as well as flash fiction anthologies. You can find her on Twitter @SYwrites.