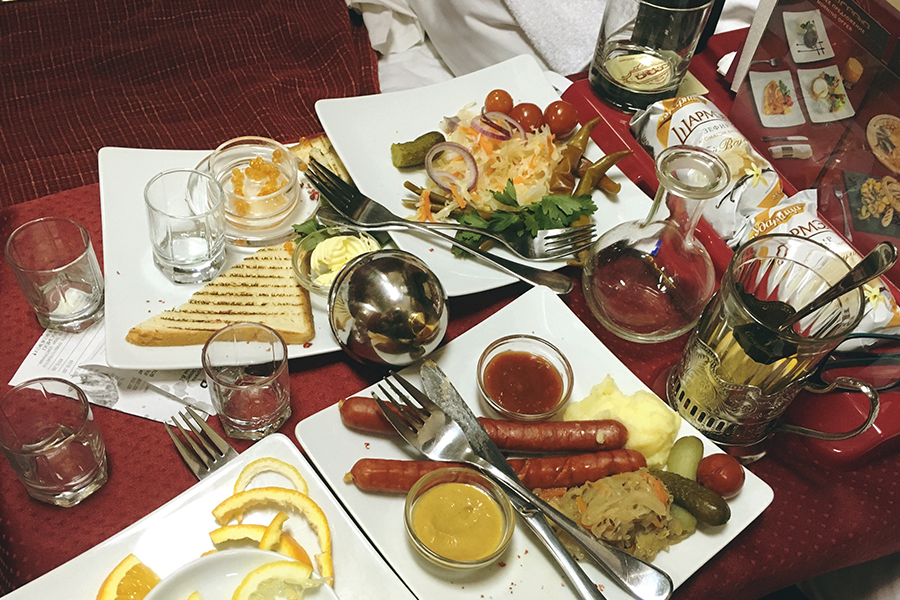 I enter a world of burnt rubber and bumping tires. Rolling luggage and passersby whiz around me, tumbling toward their destinations in a frenzied hurry. Announcements in Russian come rapid-fire over the loudspeakers, reverberating through the crowded St. Petersburg train terminal in a chorus of noise that’s accented by the occasional train whistle.

On the platform, mist swirls around idling trains, mingling with the savory aroma of frying cheburek (meat turnovers), shawarma (wraps filled with roasted meat), and pirozhki (buns stuffed with various fillings), all infused with the stench of cigarette smoke.

Ahead of me, a young woman steps hurriedly from a train car. She’s met by a well-dressed man carrying a bouquet of roses. He sweeps her into an intimate embrace. They forget about the roses and fall into each other, overcome by emotion, oblivious to the chaos surrounding them.

They don’t care about bystanders who smile at their affection. They don’t care about Vladimir Putin or Donald Trump or hacking scandals or the Cold War or the horrific death toll Russia suffered in World War II—topics that are ever at the forefront of my mind as a Westerner traveling to Moscow for the first time. The only thing they care about is each other.

It’s a tender moment in a city forged by violence.

Although more than 75 years have passed, the sting of the Nazi army’s failed Siege of Leningrad (as the city was known during World War II) is evident in St. Petersburg’s historic streets and throughout Russia. Traces of the grueling offensive that began in September 1941 are embedded like the remnant shrapnel preserved in the façade of a building, like the Soviet hammer and sickle emblems emblazoned on structures ranging from light posts to bridges.

For 872 days, Nazi forces blockaded a city the Germans thought would buckle before winter. But despite extreme hardship and apparently insurmountable odds, the city’s defenders never surrendered. The toll was great; 800,000 civilians died, most from starvation.

In 21st-century St. Petersburg, my sleeper train awaits beside the platform just ahead of me. I climb its steps a few minutes before 9:00 p.m. Inside, narrow hallways crisscross the train. I find my room; there’s a middle-aged man inside.

Aleksei is his name. He is 40 years old and heavy set, with a light floral scarf wrapped loosely around a tweed suit. His shoes have been discarded beneath one of the two small beds in our compartment. He looks at me and smiles a broad, toothy smile, then takes a sip from a glass of hot tea resting on a pull-out table. In broken English, he explains that he is traveling for work, to Moscow, where he owns a customs business that deals mostly with European clients. It’s a trip he makes regularly.

“If you’re traveling by train, you must have black tea with lemon. Only on the train,” Aleksei says. Then he removes a bottle of Johnny Walker from his jacket pocket, takes a swig, and orders dinner for us: Caviar and toast, sauerkraut, sausage, pickles, ketchup, and spicy mustard, topped off with two shots of vodka.

“Forty percent only. Not 38,” he says, taking another swig of his whiskey.

Drinking is an intrinsic part of Russian culture. While growing up about 10 kilometers outside St. Petersburg, Aleksei says he made homemade vodka and sauerkraut with his family. They soaked cabbage in water, vodka, and a little bit of salt for about six hours before mashing and transferring it to a three-liter bottle to ferment for six months. The finished sauerkraut’s flavor was intense and harsh—like the country where it was made.

Aleksei, however, represents Russia’s softer side, one that’s unfamiliar to me.

“If you come to Russia, you will find friendly people,” he says.

The compartment door opens and a waitress enters with a tray of food. I try to pay Aleksei for my share, but he refuses my money, waving a limp hand in my direction.

Then he picks up the two shots on the tray and gives one to me.

“Hello vodka,” he says, and throws it back. I follow suit.

In Russia, strict social rules surround the serious business of drinking vodka. According to Aleksei, the first shot of the night (which must always be consumed in one gulp) is proceeded by the toast, “hello vodka”; the second, “to us”; the third, “for family”; the fourth, “for friendship.”

The food disappears almost as fast as the first shot of vodka. Aleksei orders another round.

“To us!” he shouts, and we drink again. Glassy-eyed, he orders more. If he were standing up, he would be staggering. For my part, I’m feeling OK, and for a minute I’m proud of myself for outpacing him. Then I realize he’s probably been drinking all day.

“Why is vodka so popular in Russia?” I ask.

“It’s normal. Vodka is,” Aleksei trails off and smiles, then admits, almost sheepishly, as if he’s telling me a great secret, “I like wine better.”

For vacations, he and his wife often tour the wine countries of Spain and Italy. Personally, Aleksei says, he thinks vodka is overrated, but it’s tradition—especially on the train—in Russia.

The third round is delivered. “For family,” he says, and we drink again.

My head swims. I can’t tell if it’s the alcohol or the rushing train. I lie back on my bed and check the time. It’s nearly 1:00 a.m. I need to sleep and say as much before stumbling down the narrow hallway to the tiny bathroom to brush my teeth.

When I return, a fourth round is on the table. “For friendship,” Aleksei says, looping my arm through his own and tipping back his glass.

The vodka burns down my throat.

About the Writer:
Andy Castillo is an experienced newspaper journalist who has worked for a few publications in western Massachusetts and as staff travel writer for GoNOMAD Travel. He holds a bachelor’s degree in English from the University of Massachusetts Amherst and a master’s degree in creative nonfiction from Bay Path University. He lives in Florence with his wife, Brianna.