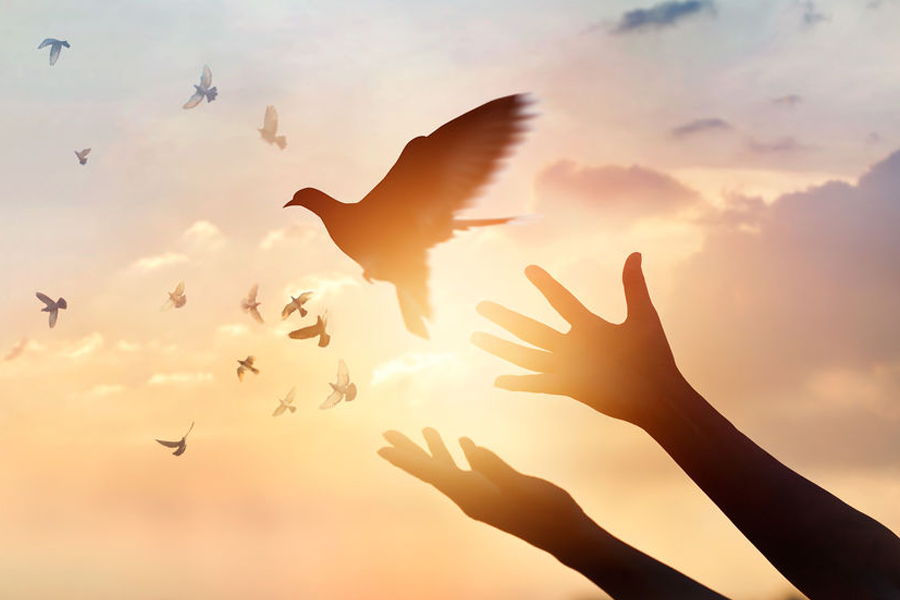 We’re at 30,000 feet. Terry is sitting in the window seat reading before he asks to get up to stretch. Less than a minute after standing, he’s having spasms in his diaphragm, his body is writhing. I need to quickly get him the rest of the way down the aisle to the back galley before he starts convulsing violently.

He tosses me his glasses, rings, and watch. I slip the rings onto my middle finger, hang his glasses on my shirt collar, and shove his watch deep into the pocket of my jeans. I lean my body into his to protect him from falling or hitting his head. During this turmoil, my diamond anniversary band slides off my ring finger and drops into the aisle. A wave of heat flashes over me as I struggle to calm myself. Two flight attendants are rattling off questions about how they can help. I’m half listening while firmly hanging onto Terry and asking for someone to please find my ring.

We still have nearly an hour of flying time. I’m terrified we might be the reason for an emergency landing.

Scenes like this have been the norm for us for over 14 years. Terry has nonepileptic seizures and severe migraines resulting from Post-Traumatic Stress Disorder (PTSD) and several Traumatic Brain Injuries (TBIs). His symptoms began shortly after his deployment to Cuba in 2004 and worsened after returning from Iraq in 2007.

Nonepileptic seizures are not treated with medication like epilepsy. They work themselves out and usually resolve more quickly when the person experiencing them listens to a meditation or soothing music and breathes deeply.

On the day of that frantic flight, we were on our way to Operation Mend, a three-week Intensive Therapy Program at University of California Los Angeles (UCLA) Medical Center designed to help veterans and their caregivers navigate the trials of living with PTSD and TBI. Terry wanted to go, but I had mixed feelings about attending yet another program.

“I’m going, with or without you,” he said, “but it’s recommended caregivers also attend.” I’m dubious, but I’m not one to leave any stone unturned.

We had already gone through a shorter program in February 2019 that wasn’t helpful, so I didn’t have much confidence in this one. Going out to Los Angeles for three stressful weeks and potentially not learning anything new would be crushing. I have chronic pain myself from severe scoliosis. Flying all the way across the country and sleeping in a hotel bed would wreak havoc on my body, but my determination to see Terry get well is fiercer than my desire for home comforts.

Our first evening at UCLA, everyone participating in Operation Mend met with the program directors. We each received a large binder containing individualized schedules and handouts for the upcoming classes. I took a quick peek. It’s jam-packed, morning to night!

How am I going to endure 90-minute classes with my back pain? It even hurt to think about sitting on a hard chair for an entire day. The word “failure” begins hemorrhaging from my binder. Surely, I’ll be sent home.

In our counseling sessions, I learn that me panicking during Terry’s seizures was making matters worse. If I remain calm, it would help Terry recover more quickly. I wouldn’t have realized this if it wasn’t for UCLA. Nobody else ever mentioned it.

Fast forward two weeks. While in class, I notice Terry staring into space, one of the precursors of his seizures. He looks at me and rocks his hand signaling it’s happening.

I’m ready to jump up, but stop myself as I glance over at Terry’s therapist who’s co-teaching. He nods at me in a way I interpret to mean “let Terry be.”  I take in a deep breath, exhale, and re-shift my focus, though it’s agonizing not running after Terry! Every visceral part of me wants to cradle him like a baby. I want to hang on tight, just like I did on the airplane—and from day one of these damn seizures.

It might sound counterintuitive, but when someone we love is struggling with trauma, sometimes the best thing we can do for them is to concentrate on ourselves and help them find their own inner power to overcome and fly solo.

Over-controlling was how I lost my ring.

About the Writer:
Maria Smith is an aspiring writer and artist who spent 16 years serving as an officer in the Air Force Reserve, where she achieved the rank of Major. After being honorably discharged due to illness in 2010, she enrolled in the University of the Rockies in Colorado Springs, CO, completing her doctorate in psychology in March 2014. She earned her MFA from Bay Path University’s Creative Nonfiction Writing program in July 2019. Maria’s art has been displayed in numerous art shows. She created illustrations for the poetry book Paintings in the Sand by Dr. Jason Dias, and designed the cover for his book, The Girlfriend Project. Maria is originally from western Massachusetts; she currently lives in Bluffton, South Carolina with her husband, Terry.