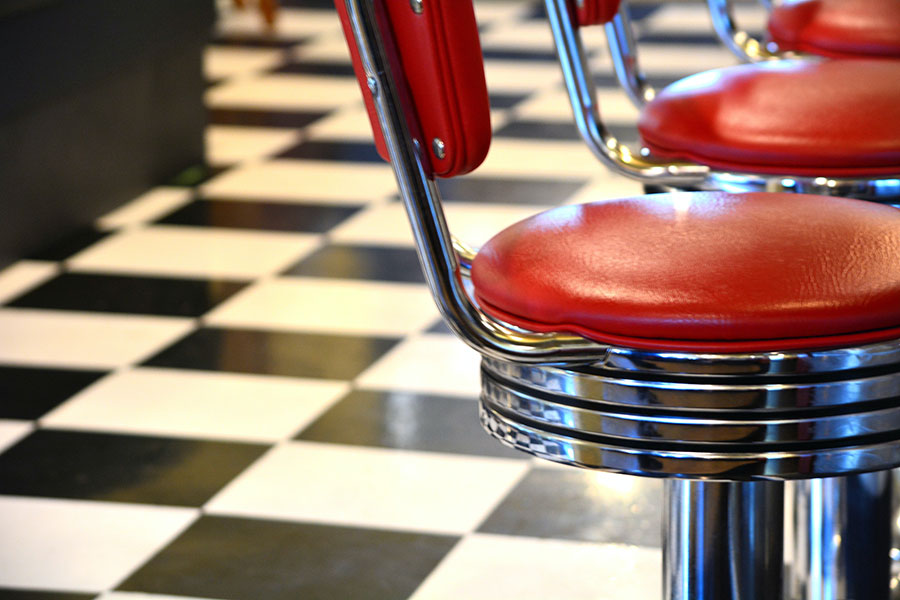 “The Kid at the Counter” is part of a new series at Multiplicity focusing on writers and their craft. Each blog publication features original work followed by commentary from the writer on its genesis, giving us unusual insight into both the work itself and the process of artistic creation.

There are people in this town who know me as the kid at the counter. The kid sitting at the counter of the diner late at night. Crayons or toys in front of me.

I was there because my mom was a waitress. Childcare was expensive, or not available. We had to eat. So she would take me with her, parking me at the counter where she could keep an eye on me.

Many wouldn’t consider this an ideal childhood. But what else could we do? Single parenthood is no joke; sometimes you have to go with the least bad option. And to be honest, being the kid at the counter wasn’t bad. It was, in fact, pretty cool. I got to eat burgers any night I wanted. I also, to this day, make the best eggs you will ever eat in your life.

Sitting at a diner counter, you meet people. As I was a child, and one trained not to speak to my elders, I mostly listened. I heard stories of the people who take their meals at diners. I listened, as I colored, to men who sat with their coffee for hours, bullshitting with friends. I heard them tell stories about the wars they’d been in. Too many of them had been in wars. I heard them talk about their kids, their grandkids. How their sister was doing down south. How their brother was going to move them to Florida pretty soon here. I heard about football games, old and new.

The stories weren’t as important as what I was learning. I was learning to listen. To have a perception of the world outside of myself.

When writing came to me, like a friend from a past life, diners became my most common writing spot. I was still at the counter, scribbling out my stories and journal entries. This is how I spent much of my teenage years.

I always knew I was going to be a writer. But the same thing happened to me in my twenties that happens to everyone. Things I knew for sure weren’t true anymore. And no matter what I did, where I was, I felt alone. I said I was still a writer. But I wasn’t writing.

It wasn’t until I stumbled into a coffee shop on Main Street that those gears started moving again. I wanted to give this whole writing thing one more shot. So I made a date with myself. I sat at a booth in the corner, with a mechanical pencil and a marble-covered notebook.

Sitting alone, I waited. It didn’t look much like the diners I’d grown up in. But the smell, that was the same. Coffee sitting on burners. Cooking eggs and oil. When I closed my eyes, I was back at the counter. And the stories came back, settling around me. Much like the old men of my youth, they had never left. They were just waiting for me to come back.

Before Covid-19 hit, I wrote in cafés as frequently as possible. Those are always my most productive writing sessions and what I’m looking forward to getting back to the most. For now, I usually write at home. I try to keep it to my office. Though, to be honest, I love using ambient videos on YouTube. Things like coffee shop background noises or “work with me” sort of videos. It gives me an alone-but-not-alone feel.  When we’re able to go to cafés and diners again, I’ll return to my habit of writing ‘sketches’ of people while I’m sipping my coffee. In public, I am a horrible spy! It’s astounding how people just do not consider who might be listening to them. But being a spy does tend to put me in situations where people tell me their stories. An elderly man once spent an entire hour just telling me stories about his experience in Vietnam. Some of the stories were horrible, hard to hear. But it was such a blessing to be trusted with them. He told me that he hadn’t even shared some of these with his family. I was blown away.

It’s interesting; the person who taught me to listen to stories doesn’t really understand my writing. I honestly don’t think my mother, God bless her, has ever read anything I wrote.

Nicole Lutrell is still known in her hometown as the “kid at the counter.” She was raised in diners and restaurants while her mom worked, which was better for her than most people would realize. A speculative fiction writer, Lutrell writes about dragons, ghosts, and spaceships. She also writes nonfiction about growing up in a small Western Pennsylvania steel town. She can be found at her blog, Paper Beats World, on Twitter @NicoleCLuttrell, and on Patreon.