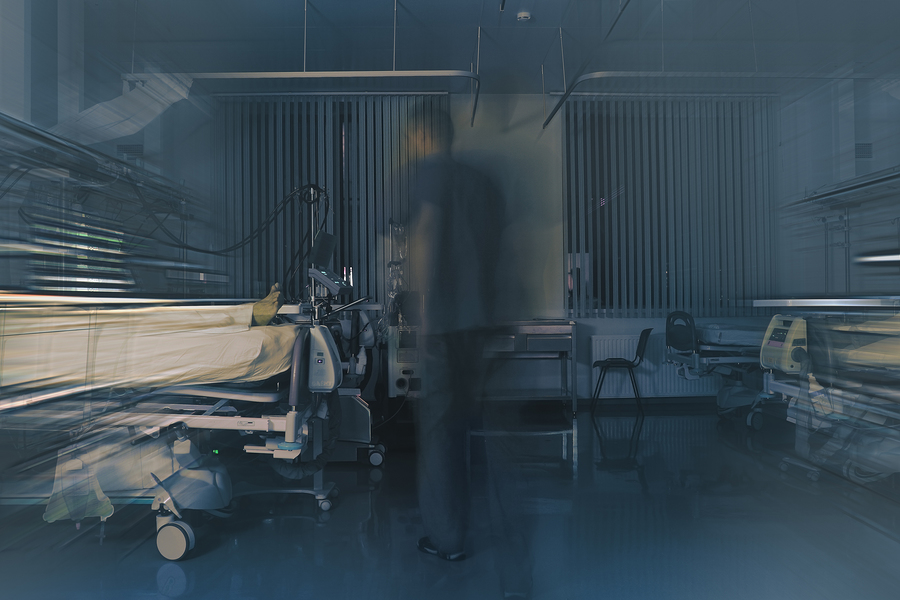 “I’m going to break your arm!”

The old man slams her to the emergency room floor, wrenches her arm behind her, wedges his knee in her back. His fingernails gouge her wrist, then jerk up and away. She pinches her eyes shut and presses her cheek into the floor, bracing for the punch she knows must be coming.

A man shouts nearby. She gasps as the old man thrusts himself up off her back. Freed from his weight, she curls into a ball and covers her head with her hands.

The old man hurls his wiry body at the oncoming hospital security guards. He crumples the first one with a right cross, then flings a chair at two others rushing toward him. She can see that his energy is nearly spent. The burly guards engulf him, pin his arms, and wrestle him onto the hospital bed in the middle of the disarray in his ER examining room.

She rolls out of the way of the swarming emergency responders and finds a wall. Its smooth solidness feels reassuring. She sits, her back pressed against it, knees clutched to her chest, and watches. A nurse produces a syringe. After the injection, the old man’s thrashing slowly subsides. His eyes close. His breathing eases. Restraints are fastened.

Someone helps her up. Someone else closes the dull gray medical drapes around them, shutting out the rest of the ER. A nurse guides her into a chair.

“Are you all right?” the nurse asks.

Am I? she wonders.

She isn’t, but she says yes anyway. She wraps shaking hands around the plastic cup of tepid water the nurse offers her and gulps it down.

Around her, hospital staff right toppled furniture, reset equipment, monitor the old man. They check on the security guards.

“I’m fine,” the punched guard says, massaging his jaw with his palm.

“Flattened by an 80-year-old,” says a second guard. “You’ll never live this one down, Jim.”

The guards disappear out the drapes, laughing as they go. Doctors and nurses drift away until only she and the old man remain in the tiny, curtained space. She drags her chair to the side of his bed.

Lying there, strapped to the metal rails, he looks deflated. Drool dribbles into his graying beard, the bristly beard that used to prickle her cheeks when he kissed her goodnight. His dark eyes—eyes that twinkled when he laughed—are now shrouded in wrinkled, twitching lids.

She lays her hand over his fist. He feels so cold. She tugs the thin hospital blanket over him.

Dementia stole his mind, his personality. Will it steal my memories of him too? Will I forget the good times? Will I remember what he was like before he got sick?

She twists in the hard, plastic chair beside his hospital bed trying to find a comfortable position, but there isn’t one.

I must remember what not to forget.

About the Writer:
Kara Noble is a writer and editor whose work has appeared in publications ranging from textbooks and dictionaries to newspapers and magazines. She served as the editor for Merriam-Webster’s language question-and-answer column, “Take Our Word for It,” their public radio program “Word for the Wise” (WAMC, Albany, NY), and their online “Word of the Day” feature. She particularly enjoys writing about horses, and her equine-related stories have been published in Massachusetts Horse, Connecticut Horse, The Competitive Equine, Tölt News, and Quarterly, the official publication of the U.S. Icelandic Horse Congress. She holds a BA from Amherst College and an MFA in creative nonfiction from Bay Path University.