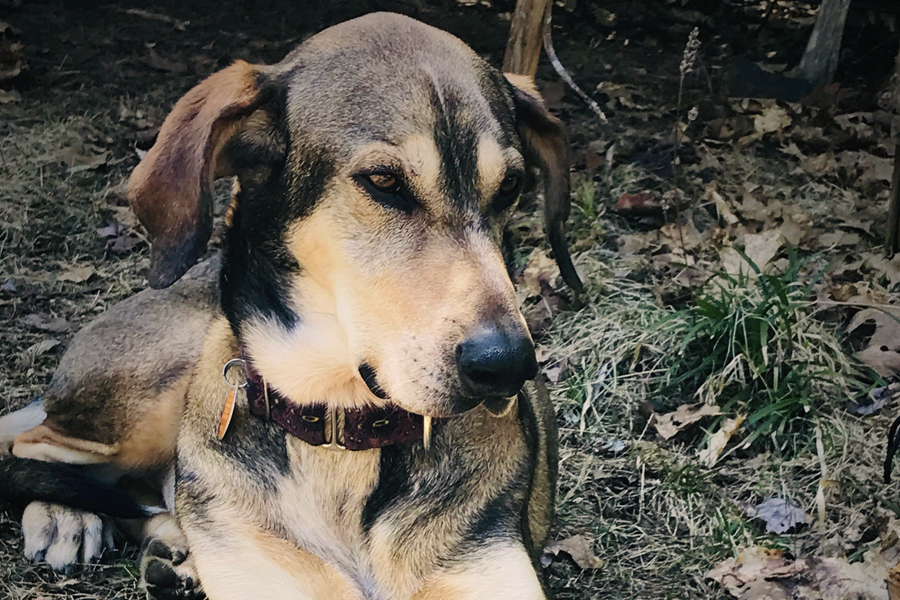 I stepped through the frigid northern Minnesota darkness toward my sleeping dog team, careful not to rouse the eight dogs tucked under warm piles of frost-coated arctic sleeping bags in front of the dogsled they had pulled 80 miles. We were at a rest stop in a 120-mile race on the north shore of Lake Superior.

Bending over the alcohol stove, I heard shuffling. It was Dory, my seven-year-old lead dog. She stood up. Her sleeping bag slipped off.

“We’re not leaving for an hour,” I whispered.

She blinked and stood quietly, observing me.

“Please lay down,” I implored.

Dory had calm focus in her light brown eyes. If I was up, she was determined to be up too.

Switching off my headlamp, I knelt in the darkness and draped my arms around her neck. It was -20F—killing temperature—but Dory was warm under her arctic coat.

The moon was full and the wolves on the trail had stayed away from the racing dog teams. Neither the cold nor the wolves would be problematic as long as the lead dog kept a steady pace. Looking at Dory I knew all would be well. She loved racing. A few years ago, on a cold, starless night in northern Maine, she led our team and out-ran a lone wolf after the meat snacks in the dogsled. She was always all in, despite the danger.

“We’ve got this, wolves be damned,” I whispered to Dory, knowing I couldn’t do it without her.

Truthfully, I would never have had the confidence to participate in that race, less than a year after my battle with breast cancer had left me weak and bald, if Dory hadn’t been leading. From the minute the veterinarian delivered her by C-section and placed her soft newborn body into my arms, I knew we were important to each other.

At age two, she graduated from being a playful puppy, running in the back of the dog team where I could see her shenanigans, to a full-fledged lead dog.

“Wanna lead for a while?” I asked Dory only 30 miles into her first 250-mile race, when my old pro, Glock, lost interest in going forward.

Bouncing in her harness, Dory dragged me to the front of the team, where I clipped her into the top spot. She had been waiting for this. Dory led the remaining 220 miles to the finish line. From then on, she led every race we ran together until she retired a few months ago.

Upon returning home to New Hampshire from our last race this year, in early March, everything became eerily quiet. The whole world was still, hoping that the prolonged silence of lockdown was the only thing COVID would force us to endure.

By mid-April, I was jobless. My partner, Kip, would soon be too. My sister-in-law in New York City was just out of the hospital after major heart surgery, and my step-father was determined to continue working at a local senior home in spite of his and my mother’s ongoing health problems. I couldn’t visit anyone.

As my options disappeared, my fear heightened. This was an uncharted trail and I wasn’t sure where the wolves were hiding.

Keeping busy held my panic at bay. I found solace in making maple syrup from the trees on my land. The physical work of hauling sap was rewarded by long hours of staring into the fire under the boiling sap pans while contemplating life. I remembered that cold night in Minnesota vividly. Dory had led the dogsled team into the moonlight, over 55 miles through The Caribou Hills to the finish line with ease and confidence. The struggle to get there felt like a dream. I had been overwhelmed by cancer for so long, but that day, Dory had made anything seem possible again.

Suddenly, I was jarred from my thoughts.  Kip was shouting from the deck.

It was his there is a dog emergency voice. I ran.

Dory was bloating. Without immediate treatment, the air gathering in her stomach would kill her. I rushed her to the emergency vet where a masked and gloved tech took her from me and told me to stay in my truck. Sitting in the parking lot, looking through the vet’s huge glass window, I hoped to get a glimpse through an open door of busy technicians working furiously on Dory.

Fifteen anxious minutes later, the veterinarian called.  Dory needed surgery—now. I choked when I heard the estimated cost was between $7500 and $9000 and wailed that I did not have that much, even on my credit card.

“Ok, but hurry,” she replied. “In the meantime, we’ll put together a quote.”

“If we have to put her to sleep, I can’t even be with her!” I was hyperventilating, barely able to speak.

Then my phone beeped, it was the vet again.

I was tremendously relieved when Dory pulled through. The next day, I was allowed to bring her home. She healed well with only an eight-inch scar on her belly, a reminder of how close I came to losing her. My finances are even more limited now, but I have no regrets. Money doesn’t live, breathe, or outrun wolves.  Letting Dory go would have been unbearable.

Sometimes, when Dory is sprawled on the couch with her legs in the air, I run my finger gently along her scar. Before long, tears escape my eyes. Sensing my mood, Dory rolls over, licks my hand. I can’t predict the future, but I’m grateful that Dory and I will both be here to greet it.

About the Writer:
Christine Richardson lives on a farm in Canaan, New Hampshire with her partner Kip and 16 sled dogs. She has an MS in Cell Biology, but left her 18-year career in science to pursue an MFA in Creative Nonfiction at Bay Path University and to work on her memoir and practice shamanism. She describes herself as an outdoor adventurer, retired scientist, dog musher, cancer survivor, wisdom keeper and writer. . .but most of all, a dog lover.