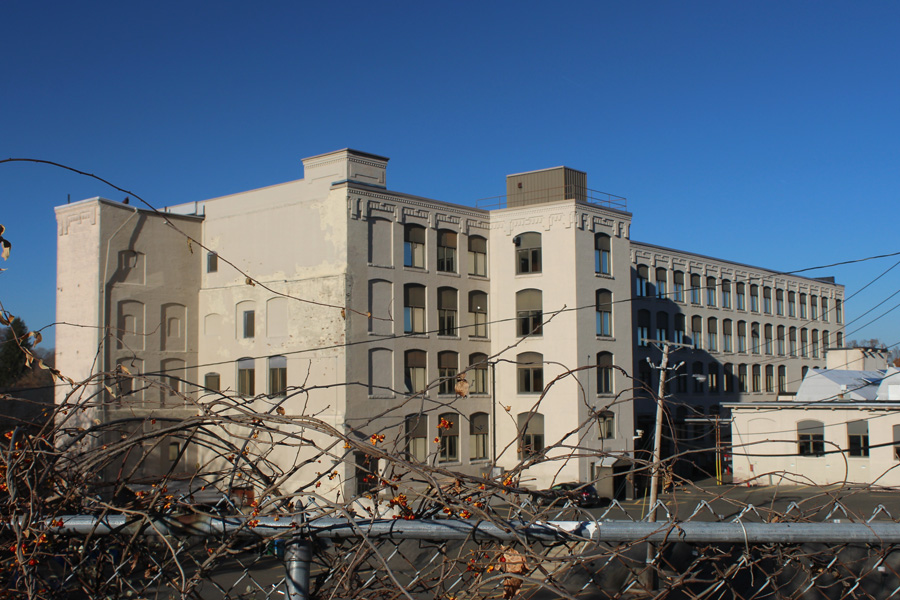 I left home for college with the normal amount of angst about meeting new people.

I needn’t have wasted time fretting—I quickly found out I had an easy icebreaker.

“You’re from where?” strangers would ask.

They’d nod blankly, as you do when meeting someone from a place you’ve never heard of but want to appear as if you have. Then they suddenly would stop: “Wait—why do I know that name?”

I learned to stand there and let them figure it out, which they usually did. They knew of my tiny Western Massachusetts town because since earliest memory they’d seen its name printed on the side of baby-blue cartons stashed beneath their bathroom sinks. My hometown, and its most famous product, had sneaked into their psyches.

Actually, the location should have read “Three Rivers, Mass.,” the village in Palmer where the plant towered on a ledge beside the Chicopee River, 11 houses down from the one where I grew up.

I passed the place nearly every day of my young life. I cannot pinpoint when I realized the unusual and highly personal nature of the things made within those brick walls, but I have always felt a kinship with kids who grew up in the shadows of offbeat manufacturers.

I once met a guy whose town thrived because of a condom company, and a woman whose high school class partied next to a brassiere factory. As embarrassed teens, they, too, had lied when out-of-town dates asked what was made in that building over there, always giving an answer like “Shovels.” Brothers and sisters they were to me.

Tampax was just another part of my Main Street, part of the scenery, this huge structure with its odd series of angled roofs. For 55 years, it turned out feminine hygiene products, and took in several generations of employees who’d otherwise be commuting far and wide for work in our largely rural area. Their cars and trucks jammed the parking lot for all shifts. They busied Main Street, walking at lunch for a bite at Dominick’s or to errands at the drugstore or the bank.

Get a job at Tampax and you were set for life. After all, you were making something that was never going to go out of style.

I spent three months at Tampax my first summer back from college, hunching from 7:00 a.m. to 3:00 p.m. at a noisy and lightning-fast packing machine, feeding into its ever-hungry maw the fashionably shaded purse containers that came free in every box and that offered a discreet way for customers to carry along a pair of products. When my machine froze, a stern Portuguese woman materialized with the right combination of impressive whacks and shoves to get those Super Pluses rolling freely once again.

On the way to lunch across the street, my line-neighbor Elmo and I stopped to admire the glass case displaying Tampax from around the world. The case held boxes labeled in languages of faraway places where the tampons had traveled and where we could only dream of visiting. Once a month, need ‘em or not, we were handed our employee bonus: a free box of 40.

The job also gave me a decent salary, a great reverence for those who do line work, and the determination to avoid it at all costs in the future. It cast a new light on my father, who, beginning in his teen years, had toiled in the filth of the Uniroyal tire factory on another rocky ledge 18 miles downriver. How could he do the same exact boring thing every single day, I found myself wondering for the first time.

“Everybody has to do something for work,” is how I remember him putting it. “I’m lucky to have a job.”

I put that in the past tense because though tampons have not gone out of style, the small-town, old-style factory has. The first blow was a curious change in the company’s name, to “Tambrands.” Downsizing followed, ending the jobs of a couple of hundred people. Then in the summer of 1997 came word that the new owner, Procter & Gamble, would close the entire plant by year’s end. The futures of employees, their families and local businesses would be shaken, and the great building would sit empty and idle.

For the first time in 55 years, my town’s kids would have something in common with too many other kids across the country. They’d have a closed-down factory to pass.

Everybody has to do something for work. But when it comes to making tampons, and making a decent living, people wouldn’t be doing those somethings there any more.

And none of us in town will have the least bit of trouble telling anybody who asks just what goes on in that building over there on our quiet and deserted Main Street.

The answer will be simple and sad and true.

Author’s Note: A version of this essay was written for The Philadelphia Inquirer in 1997. The factory building breathes with new life now, as the Palmer Technology Center. Tenants include those who build motorcycle seats, move libraries nationwide, create artisanal chocolates and, most importantly, make it a place where people once again go to work.

About the Writer:
Suzanne Strempek Shea writes nonfiction, fiction and journalism, and has authored 11 books. She is writer-in-residence and faculty member at Bay Path University, where she created the MFA program and leads its annual Summer Writing Seminar in Dingle, Ireland. Suzanne is the winner of the 2000 New England Book Award, which recognizes a body of work’s importance to the region. She has a special interest in working with those writing about trauma. Her freelance work has appeared in publications including Yankee, Down East, The Bark, Golf World, The Boston Globe, The Irish Times, The Philadelphia Inquirer, and ESPN the Magazine.