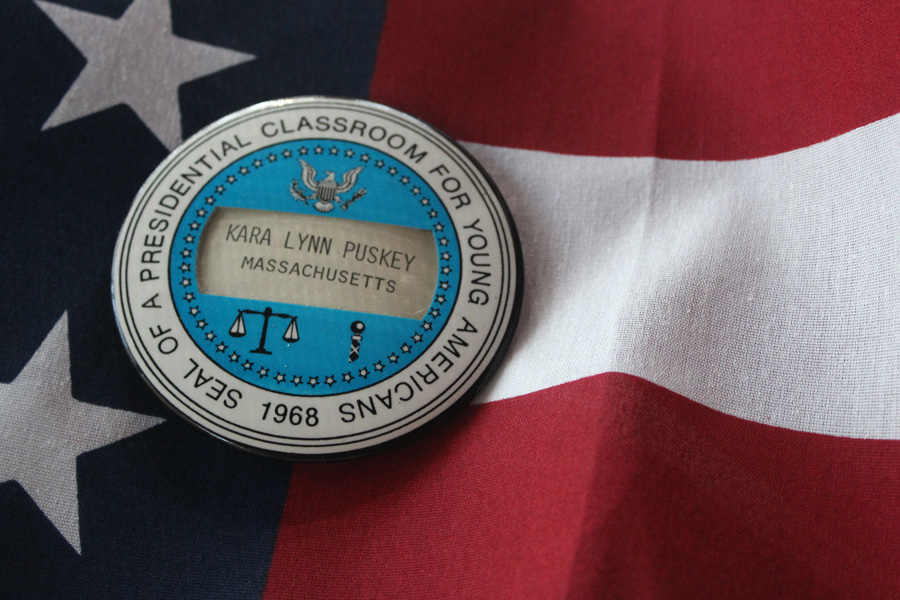 When life gets stressful, I go to the barn and clean stalls. Forking up manure, pushing around a loaded wheelbarrow, sweeping—caring for my livestock settles my mind and clears my head.

Between the pandemic and the election, I’ve needed to spend a lot of time there lately.

In the barn, I try not to think about the uncomfortable realities of the present or the bleak pronouncements about the future spouted by social media pundits. My mind wanders into the past. The current state of the present and the future makes even high school look good.

As a 17-year-old high school senior, I was always on the lookout for anything that might improve my chances of getting into college. When my history teacher announced a schoolwide competition to attend a weeklong national honors program in Washington DC called the Presidential Classroom for Young Americans, it caught my attention even though I wasn’t particularly interested in politics.

According to its mission statement, the Presidential Classroom offered the “best and brightest students unprecedented access to the federal government and the people who shape public policy.” Only four students would be selected from my high school and the competition was fierce. It was a longshot, but I applied anyway.

To my astonishment, in January 1979 I found myself standing in Washington National Airport, fresh off my first airplane flight, scanning the crowded terminal for somebody holding a sign that read Presidential Classroom.

Forty years later, most of the details of the trip are blurry. Only the biggest revelations and strongest emotions linger in my memory. Like the cute guy from Alabama who flirted with me at the opening reception in the ballroom of a glamorous Washington hotel. Meeting teenagers from all over the U.S. and its territories was exciting, but his big brown eyes and genteel drawl really impressed this New England Yankee.

At the same reception, I met Senator and astronaut John Glenn. I was so awestruck and tongue-tied, he had to prompt me to shake his hand and say hello.

I remember the thrill of seeing the real Constitution at the U.S. Archives—and being told it would automatically drop into a protective vault below it in the event of a nuclear attack.

Jimmy Carter’s White House looked as comfortable and reassuring as Mr. Rogers’s television living room. Even so, when we were allowed to peek into the Oval Office, my first thought was That’s where Nixon sat when he resigned. It was a relief to know those dark days were behind us.

As I stood beneath the magnificent dome of the Capitol Rotunda surrounded by statues of the luminaries of U.S. history, all I could think was that I was standing where they put Abraham Lincoln’s casket after he was assassinated. We were told that the catafalque, the wooden platform built to hold Lincoln’s coffin in 1865, had been used to support every coffin laid in the Rotunda since then. Ruth Bader Ginsberg’s casket was placed atop it when she became the first woman to lie in state in the Rotunda in September 2020.

I was furious when Massachusetts senior Senator, Ted Kennedy, blew off our scheduled meeting. “The Senator is very busy,” his staff said.

I was mollified when our Congressman, Silvio O. Conte, warmly welcomed me and my classmate, Christine, and led us onto the floor of the House of Representatives before it opened for the day’s session. We stood several rings into the chamber’s semicircles of polished wooden chairs gaping at the huge American flag behind the podium where Boston’s gruff Irish son, Tip O’Neill, presided as Speaker of the House.

“Someday, one of you might sit here,” Conte said quietly.

At Arlington National Cemetery, after watching the changing of the guard at the Tomb of the Unknown Soldier, one of the boys asked about Vietnam and the Fall of Saigon in 1975. “That’s history,” said the officer assigned to supervise our visit. “We need to focus on the future.”

The Smithsonian’s new Air and Space Museum opened during the hoopla of the national bicentennial celebration in July 1976. Standing in front of its exhibit of the capsule from 1969’s Apollo 11 moon flight, my thoughts flashed back to my first meeting with my high school guidance counselor in ninth grade.

“What do you want to be in the future?” he asked me.

He frowned at me. “Girls can’t be astronauts,” he said. “Let’s talk about more realistic options. You could be a nurse or a teacher.”

The Presidential Classroom taught me I had other options. I could work to make laws that would change stupid rules like that.

One of our final trips of the program brought us to the Lincoln Memorial. We clustered around the spot at the top of its marble steps where contralto Marian Anderson sang to a crowd of 75,000 on April 9, 1939 after the Daughters of the American Revolution (DAR) refused to allow her to perform in Constitution Hall because she was black. Eleanor Roosevelt, outraged by the DAR’s actions, promptly quit the group and arranged an alternate concert venue.

Standing there shivering in the chilly January air with my Presidential Classmates, I felt sure I heard echoes of Anderson singing “My country tis of thee…of thee we sing.” I swore I could hear King say, “…even though we face the difficulties of today and tomorrow, I still have a dream…a dream deeply rooted in the American dream.”

Leaning on a manure rake in my barn and thinking back on that trip, what I hear loudest now are two nagging questions.

Has my generation moved this country toward that dream or away from it? Have we made things better or worse?

Things have changed. In 1979, all nine Supreme Court Justices were male; now three of them are women. Back then, the 96th Congress had only 16 voting African American members. Today’s 116th Congress includes 56. We have more regulations, but less pollution; higher taxes, but fewer armed conflicts with other nations. We are still plagued by “isms”—racism, sexism, anti-Semitism, ageism—among others. We all know the economy is still a work in progress.

I’m not objective enough to judge whether we’ve driven this country forward or plunged it off the road into a ditch, but the more I stand in the barn and think about it, the more I share the opinion of Ben Franklin, who had a keen interest in agriculture and who mucked his share of manure. The Presidential Classroom, taught me how the 81-year-old Franklin addressed similar questions in his final speech before the Constitutional Convention on September 17, 1787:

“When you assemble…[People] to have the advantage of their joint wisdom, you inevitably assemble…their prejudices, their passions, their errors of opinion, their local interests, and their selfish views. From such an assembly can a perfect product be expected? It…astonishes me…[that] this system approaches so near to perfection as it does.”

We’re as diverse, passionate, and opinionated as the folks in Franklin’s day. We’re definitely as imperfect. But we’ve managed to keep the republic that is this “democratic experiment” going so far. Hopefully, if we keep shoveling, then forkful by forkful, we’ll get things cleaned up enough to truly realize the American dream.

About the Writer:
Kara Lynn Puskey-Noble is a writer and editor whose work has appeared in publications ranging from textbooks and dictionaries to newspapers and magazines. She served as the editor for Merriam-Webster’s language question-and-answer column, “Take Our Word for It,” their public radio program “Word for the Wise” (WAMC, Albany, NY), and their online “Word of the Day” feature. Her equine-related stories have been published in Massachusetts Horse, Connecticut Horse, and The Competitive Equine. She holds a BA from Amherst College and an MFA in creative nonfiction from Bay Path University.