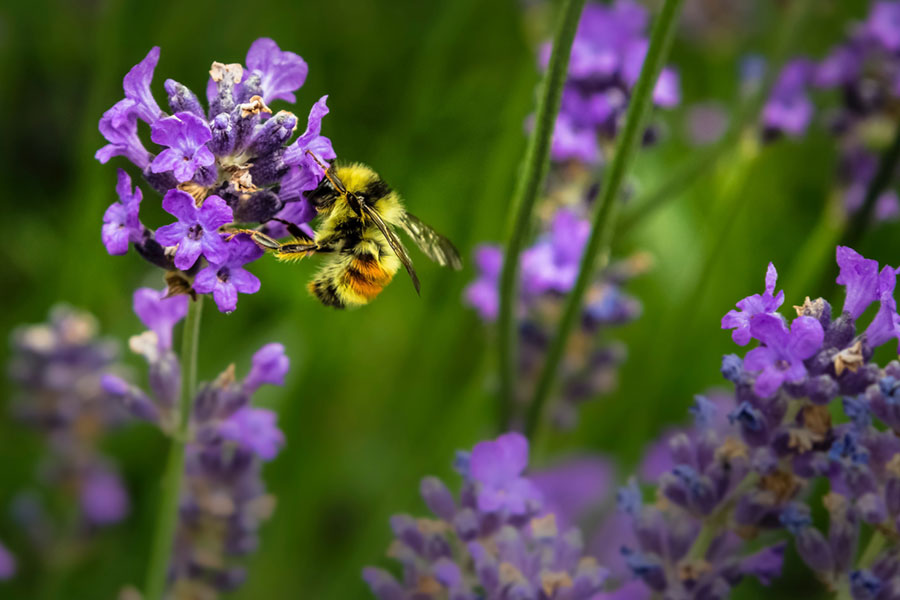 “When Bees Used to Do This” is part of a new series at Multiplicity focusing on writers and their craft. Each blog publication features original work followed by commentary from the writer on its genesis, giving us unusual insight into both the work itself and the process of artistic creation.

A pink-flowering tree concealed a beehive, given away by the swarm’s constant drone. Along the way home from school, I’d duck into the muddy creek bed to stay clear. This was the creek where my cousin caught a snake in a lunchbox and brought it home; I opened it to peek, and Dad hauled me away. After rain, the creek would be a roaring violence, a brown crash washing out old mud for new. Afterward, the creek bed would not resemble itself, though I could never say how.

I’ll feel this again decades later, walking that same way home I once walked, when I might stop at a familiar mound of grass and ask my brother beside me, Did there used to be a tree here? and he might just shrug. Like I might ask him when was the last time he saw a beehive and he may answer, I’m not sure I ever have. But we have, I know. Like I might now ask my cousin if he remembers that one time with the snake in the lunchbox, and he might answer, Did that happen? in his basement where he has hand-built two-meter glass squares to house the six reticulated pythons he adores. He can forget how things began, but life remembers: from that moment, the boxes got bigger and more expensive, the snakes more dangerous, but it follows a steady course. He might say, That sounds like me. The snakes of now have pushed out of his memory the snakes of then.

These days I grow milkweed and count monarch caterpillars in the garden. They ask me, Do you remember how many butterflies there used to be? God, they used to be everywhere! And I don’t. Not at first. But they point at the bark on nearby trees and remind me: Yellow, furry caterpillars all over the trees near your childhood home, hundreds and thousands of them, so many cocoons they lined the house’s wood paneling with silk. I recall enough to say, I tried to raise them in a bottle every year. They always died. And I, using cotton swabs to pollinate flowers by hand, ask, Do you remember when bees used to do this? They say, No. We did see a bee today. Just one bee, so peaceful in its patient murmur, so yellow and heavy, that we can’t seem to remember. We have lost that world. We have lost even the memory of that world.

The second issue of Reckoning, a literary journal, begins with an essay by Michael J. DeLuca: “On Having a Kid in the Climate Apocalypse.” It’s powerful. Among his many thoughts, DeLuca notes declining animal populations, and laments that his newborn child might never see salamanders or living coral. I was thinking about that notion a lot at the time, asking myself: what did I know when I was young that our children never will?

A farming co-op nearby was offering beekeeping classes and my wife and I were talking very seriously about bees. It came up that she’d never seen a beehive before and didn’t know what they sound like. I realized it had been a long time since I’d come across one myself. How long had it been? When was the last time I just, simply, passed by a beehive in a tree somewhere?

This question unlocked memories that I… had not exactly forgotten, but had just never taken the time to remember. Once I remembered the beehive, the tree, the creek, all kinds of memories came back, the associations, the people, like scenes added on the front of stories that I knew very well. This all collided with the environmental question I’d been belaboring. I realized that it’s not only the next generation losing these things, but us ourselves, who are already failing to remember them. I tried to discuss it with my wife, but it was too abstract for me to really verbalize, so I ended up writing it instead.

The structure of my essay wasn’t accidental. In my first draft I tried to relate my memories and associations in a way that captured how fast they’d returned to me. It was messy and incoherent, but I liked its indirect abstraction; it was, after all, about my memories more than my thoughts. That first draft was overly long, so lost the sharp pang I’d hoped to achieve. To revise, I set myself a limit of 400 words, which is a much stricter limit than I usually impose. I had to chop off roughly half of that first draft and minimize sentences down to only their most essential concepts, but I did achieve a satisfactory draft of exactly 400 words. To finish, I gave myself back a few extra words so that I could linger in the final sentence longer, wanting to dwell in the solastalgia.

Environmental themes slip into my writing a lot, but with this essay I wanted to strike it deliberately. This essay carries a different feeling than other environmental writing I’ve done, besides just melancholy or even bitterness. This essay, I think, might be my attempt to tell a reader to engage mindfully in remembering, similar to the way that I accidentally managed to remember. It may be an attempt to say: you have lost something, and you don’t remember what you have lost, and you should care about that.

K. James D’Agostino (they/them) is an author and poet, and an editorial assistant for the Ninth Letter literary journal. They have a BA from the University of Houston and are currently an MFA candidate at the University of Illinois. Their most recent work has been published in The Gravity of The Thing and the KAIROS Literary Magazine. Follow them on Twitter @KJRussell_write.